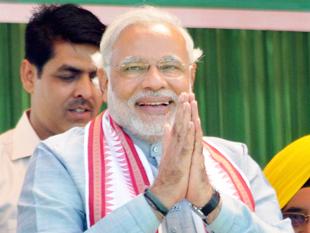 May 23, 2014: The branding doesnt stop with NaMo campaign for General Elections 2014. The NaMo team seems to be trying to extend this to the governance and policies too. First of it started appearing with the foreign policy now getting  branded as ‘Vajpayee-plus’. It is again a very carefully thought brand line, which has  an emotional connect to something which has worked well in the past reflecting the policies during Atal Bihari Vajpayee ministry. This will send positive signals to the countries out there.

Howerver NaMo team has also ensured that it is not a copy cat exercise by giving it a ‘plus’. It seems this branding was already done and it has been laid out. Inviting the national heads of all SAARC countries to the swearing in ceremony is pitched in as a first step of this new foreign policy. The attributes which are being laid out regarding this branding seems to be ‘out of box thinking’ and ‘pragmatic’. This very clearly conveys the message out to the masses that it is going to deviate from our usual foreign policy where the focus was more on maintaining our ties with Russia and keeping a conservative space with countries like China and Pakistan. Narendra Modi seems to be keen on changing this and wish to focus more on getting closer to countries like Japan and China. From the early signs he seems to be in the pursuit of making ‘Asia’ stronger against the western power. He is clear that he wants to take a pragmatic stand on relationship with neighbors and other countries as against BJP’s usually strong negative stand towards Pakistan.

The new policy also favours  having stronger focus on resolving the issues with Pakistan through the process of peaceful dialogue. The brand message is out there, now it remains to be seen how it finally evolves out.

Anyway there are more branding case studies coming out of this NaMo’s campaign.

Akhil S Kumar - March 2, 2021
0
CavinKare has reported the new launch of its entire milk brand – H-Milk, along with the appointment of actor Meena Sagar as...