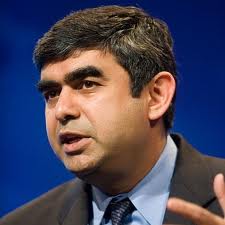 June 2, 2014: Is the years long search for Infosys CEO coming to an end? According to unconfirmed reports coming in, Vishal Sikka, former SAP executive is all set to join as Infosys next CEO. He had resigned from the German giant few days back. He was serving as SAP Executive Board Member and is widely known for his contribution to the SAP HANA big data technology. HANA has been a huge success and now a strong cash churner for SAP.

Reports suggest that the CEO nominations committee constituting K V Kamath, Narayana Murthy, Kiran Mazumdar Shah and Seshasayee have zeroed in on Vishal Sikka’s name for the top post of India’s software giant Infosys. Industry experts believe that this will be the first time Infosys is bringing in a Technology Expert to the helm of its affairs, though the company is known for its execution capabilities. Perhaps the recent moves of companies like Microsoft too motivated Infosys to move to this new direction. Many believe Sikka’s product visionary capabilities and Infosys power of execution could combine well for the company to emerge more strong and successful in the years to come.

The strong positive signals coming out on possible Vishal Sikka’s appointment will turn out to be good for Infosys in the stock market too.