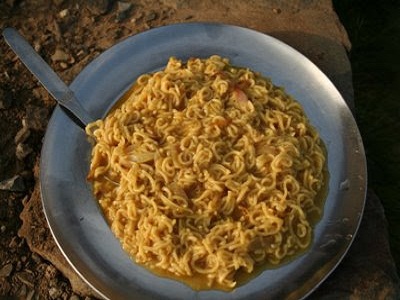 After launching the Maggi noodles again in the country after clearing the checks that were mandated by the Bombay High Court, Nestle is pushing on the ad campaigns hardly. Now, the company has rolled out a new New Nestle Maggi noodles ad for the instant noodles brand Maggi. This ad campaign has been conceptualized by the ad agency McCann Erickson.

When the film opens, a college hostel is seen. It shows three men dressed formally knocking the door of a room. A young man opens the door, and one of the men asks him to move claiming that it is their room. They casually walk into the room and take a look at the cupboards, the bed, the fan, and also note that there is no change. This indicates that it was their hostel room when they studied. The men get comfortable in the room and the youngsters who are the current occupants get really uncomfortable.

Of the three men, one throws packs of the instant noodles Maggi towards another, and he also asks him to prepare the same. The person who gets the packs asks one of the current occupants to give him a bowl to prepare Maggi. Then, the young man asks who they are, and they reply in unison that they belong to the 1997 Batch.

On hearing this, the young boy introduces himself to be a first year student and also brings his friends to join the cooking session and they all celebrate with Maggi. The group of men enjoys the noodles together and they say “Wohi taste, superb”.

The TV commercial of Maggi covers the students living in hostels was released on January 30, and it is promoted currently with the hashtag #NothingLikeMAGGI.

In the meantime, Nestle India has brought back its chicken variant of Maggi that will be going on sale from February 11 via the online marketplace Snapdeal. The same will be available as a limited edition one.