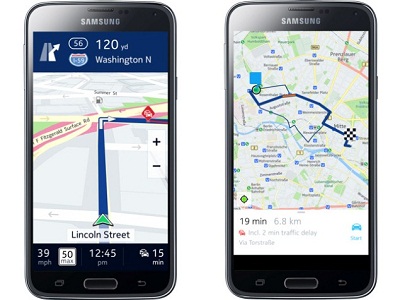 August 9, 2014: Over the weekend, the Finnish company Nokia announced its tie up with Samsung to bring the beta version of Here maps and location based navigation services to the Android and Tizen based devices from the latter.

It is claimed that there will be two versions of the Here mapping product with the Android version being free meant for the Galaxy lineup of devices and the Tizen version for the Tizen powered smart devices such as the Gear smartwatch.

Regarding the partnership, Nokia has stated that the Here app will be included on the Samsung Galaxy devices exclusively. Besides Samsung, the firm is also planning to make it available for the other Android devices by the end of this year. However, the specific time frame for the inclusion of Here for Android is yet to be disclosed. It was also revealed that the Here beta for Samsung Galaxy smartphones will be available while the Gear S goes on sale. Soon after the app is made available, the Here (beta) can be downloaded from the Galaxy App store.

Here will power Tizen app called Navigator on the Gear S and this will provide turn by turn walk navigation and even public transit routing. The app also facilitates in storing the map information on the device for offline navigation. Interestingly, the Navigator app on the smartwatch can be paired with the Here (beta) app on the Galaxy devices. Also, the app will function with the Car Mode feature and Glympse app on the Galaxy devices.

Mapping is becoming the trend these days with the advantages of location based services. Such killer apps have become a part of our everyday lives, thereby taking the smartphones beyond their basic functionality like voice calling and texting.

Consequently, when such a feature is getting added to the Samsung devices exclusively, the world’s most popular Android smartphone market is sure to climb up the ladder of competition further. This way, Samsung can be a step higher than the established rivals such as LG, Sony and other until the Here maps app hits the other Android devices.

Narthana Raj - April 12, 2021
0
According to the University of Cambridge's Cambridge Bitcoin Electricity Consumption Index, China's share of global Bitcoin mining was about 65 percent as...