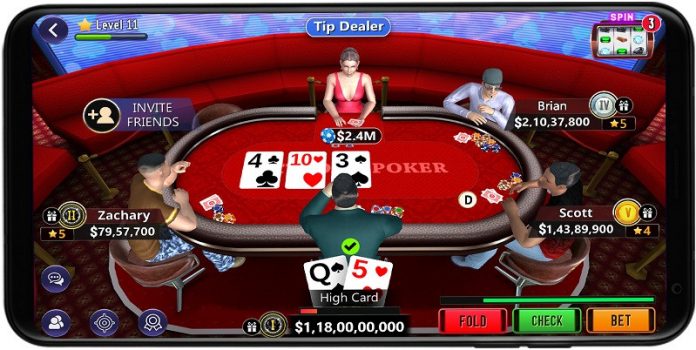 Octro Inc, India’s largest mobile gaming business, has launched Octro Poker, the world’s most immersive 3D poker software, on a global scale. The game can be played in real-time in many modes such as Blind Poker, 5 Card Poker, and Slots in Texas Hold’em version, and it includes unique 3D visuals with features such as player personalization, private tables with voice chat, extensive player statistics, and poker statistics.

Commenting on the new game, Saurabh Aggarwal, Founder & CEO, Octro Inc. said that Octro Poker’s mission is to become a one-stop-shop for #allthingspoker. The game was created for a global audience, with a special emphasis on private tables (home games) and voice chat, so players can choose to play with only their friends.

The game and player data (VPIP, PFR, Raise/Fold percent, and so on) that they provide at the end of each game on a private table are a world first. They’ll be offering multi-table events and private clubs shortly.

Online poker has seen a rebirth due to the recent growth in the amount of time people spend online. Online poker activity has surged by more than 50% in some nations since social distancing and lockdowns were implemented. New players are also keen to join the game, with the number of first-time poker players rising by more than 200 percent in the same period.

Octro, based in India, is on the cutting edge of delivering globally scalable leisure alternatives, with Octro Poker being the first move in that regard. Octro has already established itself as the market leader in TeenPatti and PlayRummy in India. Octro’s other monopolies include Seep and Octro Tambola, both of which have seen tremendous growth in their gameplays.

Octro Inc. is India’s fastest-growing mobile gaming startup, with App Annie, the leading app industry analytics organization, ranking it No. 1 in terms of player spends (India HQ). The increased popularity of online games has given the gaming industry a major boost. India’s market is now increasing at 40% per year and is predicted to reach $14 billion by 2025.

One of the few industries to have not only survived but prospered during the pandemic is the online gaming industry. Covid-19 has ushered in a new generation of gamers with spare time and a lack of offline entertainment options when at home.

According to industry insiders, the eSports and video game markets have already exceeded their counterparts in the film and music industries, with an annual economy worth more than $300 billion by 2025.