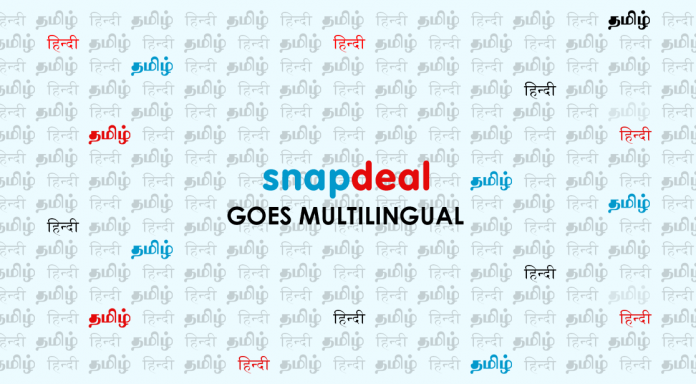 June 3, 2014: How do you feel when you go on an online retail store and find that it is throwing out options in your regional language? Definitely it would be more appealing, isn’t it? This is precisely what the e-tailers like Shopclues, Jabong , Snapdeal and Flipkart are doing. In an effort to take the customer engagement to the next level all these online retail stores are on various stages of launching their sites in regional languages like Tamil and Marathi and the national language Hindi.

Snapdeal has already started with Tamil and Hindi this year and Shopclues is expected to roll out pilot project in Gujarati, Tamil and Hindi in a month’s time. Snapdeal will be launching Telugu, Kannada, Marathi, Bengali and Gujarati version before Diwali. Flipkart is also said to be working on a similar project which believes that localisation will be a large theme in ecommerce in the next one or two years.

Sanjay Sethi, CEO and cofounder of Shopclues says “More people who are not transacting today will start using ecommerce. Second is that their confidence will go up in buying so they will buy more higher-priced items.”

Ankit Khanna, Senior Vice-President, Product Management, Snapdeal adds that, “We also get more than 50% of our sales from tier-II and tier-III cities. Though these customers have realised the power of ecommerce they still don’t have a very good understanding of English.”

It is estimated that 55 per cent of the sales generated by e-tailers is through outside tier-I cities and portals like Shopclues are getting over 70 per cent of their sales from smaller towns. So it definitely makes more sense for online retailers to add multilingual features on their websites as it will help them to reach every nook and corner of the country which has got a wide Diaspora.

Many believe that this change has happened because there has a considerable pick-up in mobile channel for e-tailers. For online retailers like Flipkart and Jabong the sales through mobile applications is said to be 20-25 per cent and for Snapdeal it s around 55-60 per cent. Praveen Sinha, a cofounder of Jabong was quoted as saying, “Local language customers are now enabled with internet (with smartphone and data penetration). So from market importance point of view it is becoming more relevant today.”

When Indian etailing market is expected to grow to USD 8.5 billion in 2016 from USD 2 billion in 2013, it is imperative that the online retailers look to increase their customer base by using local language. Online retailers would be offering regional language services for detailed product descriptions. Even call centres in future would be giving out billing statements in local languages. And according to experts, connecting with customers in their own language while making complex purchases which are more emotion driven is definitely going to help the customer in making a informed choice and the retailer by adding more revenue.