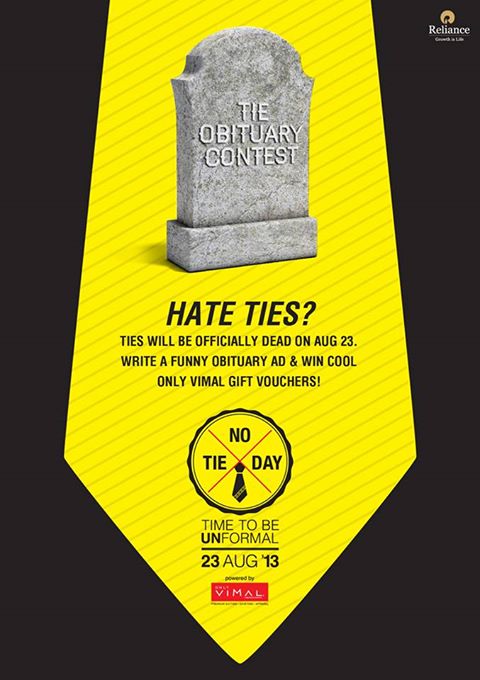 August 27, 2013: ‘Be Unformal’ this is the new campaign of Only Vimal, the textile brand from Reliance Industries. Reliance which launched this campaign for Only Vimal has come out with a new anthem as well ‘No Tie Day’ in an attempt to makeover the brand ‘Only Vimal’ and to connect with the young Indian customers.

A high decibel campaign which was unleashed by Only Vimal, eight videos was released online urging people to discard Speaking about the campaign Manish Bhatt, Founder Director, Scarecrow Communications said, “We designed the campaign with the theme of ‘Be Unformal’, because it is an attitude that today’s young Indian trendsetter seeking change believes in.  It is a crusade against boring formal wear and introduces a new way of dressing up in the corporate world.”

Only Vimal has also come out with its own marketing micro site www.vimalunformal.com which would be used for all the ‘No Tie Day’ online activities. The company has also created a Facebook
App ‘Tie Obituary Contest’ for this campaign.

Passionate in Marketing - January 24, 2022
0
Chennai: 24 January 2022: Technology has had a huge impact in every aspect of our lives today. There’s an app for everything...