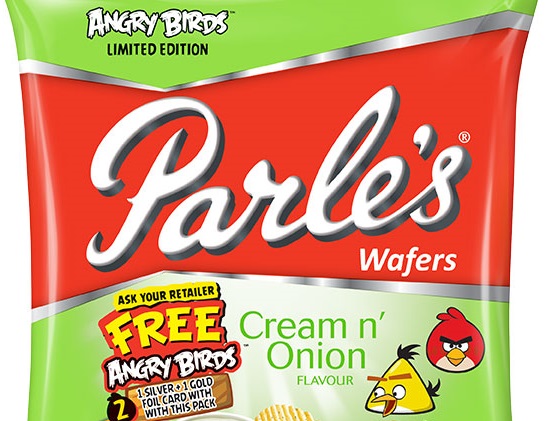 August 24, 2013: What is common between Angry Birds and Parle Products? Definitely one being both are popular. Parle in its bid to increase the customer base especially among kids has partnered with Rovio Entertainment Ltd. for the Angry Birds franchise. With this tie up Parle Products has become the first FMCG company in India to have a tie up with Rovio.

Customers who buy Parle wafers will get Angry Birds trading cards. They will also be getting exciting redemption offers, which the customers can exchange with a certain number of redemption coupons and get assured gifts. Angry Birds trading cards will be available with Rs.5, Rs.10 and Rs.20 packs of Parle Wafers.

Speaking about this association of Parle Products with Rovio Entertainment, Krishna Rao, Group Product Manager, Parle Products said “Angry Birds is very popular worldwide, having a lot fans amongst the kids and youth in India. Angry Birds is famous across all platforms and has a mass appeal widely. Within this popularity we have associated with Rovio wherein we have come up with a consumer offer of providing Angry Birds trading cards to the prospects.”

Coinciding with the launch of a new marketing campaign to promote this tie up on multiple platforms, Parle Wafers would also be launching two new flavours, Piri Piri and Khatta Meetha. Rovio in India is represented by its licensing agency Dream Theatre and Parle has entered into an agreement with them. Mr. Jiggy George, Founder & CEO, Dream Theatre commented on this tie up saying “We are excited by this association as we can bring more delightful Angry Birds products to the market in India to drive excitement and connect with consumers at multiple levels.”