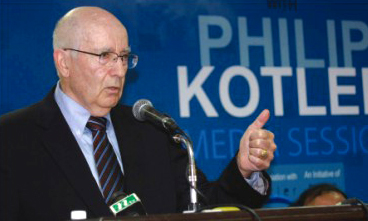 March 18, 2013: Dr.Philip Kotler who popularised the concept of 4 P’s of Marketing suggested by McCarthy has added a new P to the existing 4P’s. In an interactive session with the audience at JRE Group of Institutions in Noida, he said that he has added a new P and that fifth P is “Purpose”. Kotler said that “Purpose” is a very important like the other 4P’s and added that the purpose of most businesses is to earn money. He stressed on the point that this is not enough especially in countries like India. He was of the opinion that marketers should have a regular purpose i.e. to make money and the higher purpose should be to make a difference to the people.

During the talk he also stressed on the point that future marketers need t move away from the old medium of communication and embrace the new medium i.e. social medium. Dr. Kotler also said that the companies which are now spending 10% of their budget for social media marketing after 5 years would be spending 50% of their budget for this medium. He also stressed on the point that marketers need to be more analytical and look for new opportunities by making use of the “Big Data”.