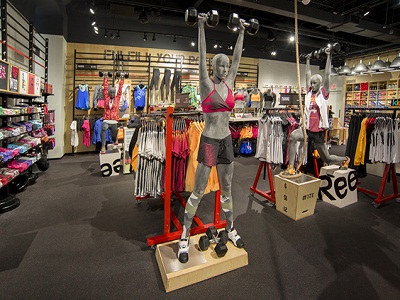 Reebok is appears to be in plans to re position its brand as a fitness focused one in the Indian market. The brand is planning to set up 15 new ‘Fitness Studios’ format stores in the country by the end of 2016.

Regarding this, Somdeb Basu, Reebok India Brand Director claimed that in 2012, the firm decided to focus only on the fitness criteria and they have taken the necessary steps to reposition the same from a sports-gear brand to a fitness brand. He confirmed that they will be opening 15 new format stores as mentioned above by the end of the next year.

These upcoming Fitness Studio stores will not only sell the Reebok merchandise, but also undertake classes in aerobics, yoga and other workout forms. As of now, there is one Fitness Studio in Mumbai.

Reebok has also come up with new format retail stores that have changed product assortments. The executive confirmed that the firm has stopped selling sports goods such as cricket bats and others. He added that they have come up with fitness related merchandise.

In addition to setting up 15 new stores, Reebok being a part of the Adidas Group is aiming to convert all the current stores into such new format Fit Hub stores by the year 2017. As of now, Reebok has 300 stores in the country and of these 130 are Fit Hub stores. The Reebok Fit Hub stores provide fitness and tainting products apart from offering guidance, advice and information to the community based fitness events.

The Reebok executive added that the launch women centric fitness products and having more items on the store displays have earned the firm a good revenue contribution from women customers. The segment has grown significantly from 15 percent a couple of years back to over 30 percent. He revealed that the overall contribution from female customers has increased to 45 percent.

Notably, Reebok is re-building its brand and operation in the country after it was reportedly claimed to have involved in a fraud of Rs 870 crore in March 2012. The ones claimed to be behind this fraudulent act were Shubhinder Singh Prem, former Managing Director and Vishnu Bhagat, former Chief Operating Officer.