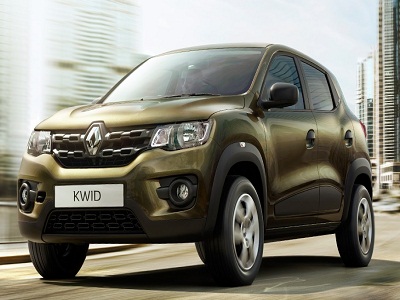 The France based car manufacturer Renault has opened a price war in the Indian entry level hatchback market segment. Lately, the company announced the Kwid SUV styled hatchback that is priced aggressively at Rs 2.56 lakh onwards. This pricing has posed a challenge to the rivals including Hyundai’s Eon and Maruti Suzuki’s Alto.

The vehicle is priced at Rs 30,000 lower than Alto that is the segment leader. Also, it is Rs 54,000 lower than Eon from the South Korean car manufacturer. Kwid has entered this segment with the top end model with the features such as Media-Nav system with a 7 inch touch screen, one touch lane change indicator and digital instrument cluster. These features are offered in this segment for the first time at a price of Rs 3.53 lakh. This price point is untouched by the other manufacturers.

Renault is all set to expand its presence to 80 percent of the passenger vehicle market in
India. Right now, it has a market share of 50 percent. The market size for Kwid is expected to be 50,000 units per month, stated Sumit Sawhney, the CEO and MD of Renault India Operations.

The Renault Kwid is built on the all-new platform called CMF-A (Common Module Family). This platform is designed and developed in India. The model is critical for Renault to attain the mid-term target and also build its current volume that has been dropping constantly.

The car manufacturer is hoping that the Kwid will corner a market share of 5 percent in a couple of years. The executive stated that they consider India as an important market and so they will launch a minimum of one product per year. The vehicle will have more than 98 percent localization that is also more than its rivals.

The Kwid makes use of an 800 cc three-cylinder petrol engine and it has a fuel efficiency of 25.17 kmpl being the most fuel efficient car in the segment. The one litre variant of the Kwid will be launched in India in the upcoming festive season.

Get ready for PepsiCo Tropicana in powder format