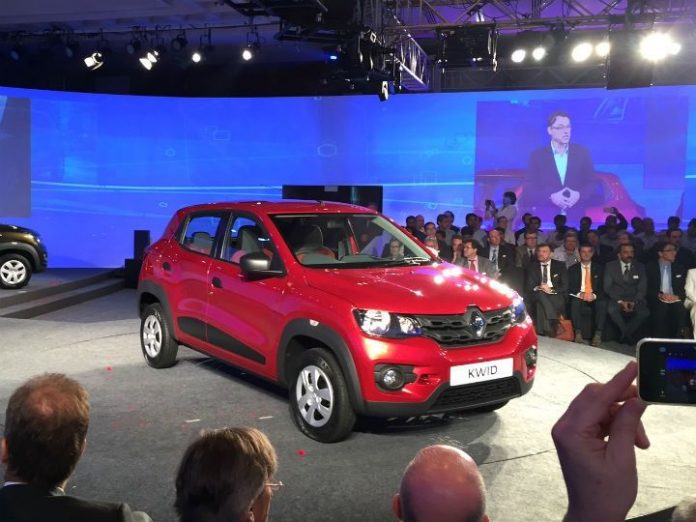 Renault today unveiled its low cost hatchback named Kwid which it had been developing since last fee years in Chennai, India. Christened as one of the most affordable cars from the Renault, it is expected that the company would be launching Kwid during the festival time of September-October 2015. Renault Kwid which shares its platform with Datsun Redigo will have close to 98 percent localization and would compete with Maruti Alto and Hyundai Eon.

Kwid from Renault would be powered by a 800cc petrol engine and promises more fuel efficiency than Alto and Eon since it weighs just 678 kg. Renault Kwid would be having a 5 speed manual gearbox and 3 cylinder 4 valve unit mated to 5 speed manual gearbox. This first car from the alliance on the CMF-A platform has got a tall boy design and good ground clearance of 180 mm to tackle tough driving conditions in India. Renault claims that it would be affordable to maintain Kwid and its boot is considered best in the class. Kwid could get a automatic transmission (AMT) option in the future.

The exterior of Renault Kwid throws a bit of attitude and has good front styling. With large headlights it gives a imposing look. The interiors of Kwid are also top end and it would be getting get a touchscreen multimedia system which will be a segment first. The Kwid would come with a driver’s side airbag as well.

Though the exact price of Renault Kwid has been kept under wraps it is rumoured that it would carry an introductory price of Rs 3-4 lakh to take on the current popular entry level small cars like the Maruti Alto and Hyundai Eon.