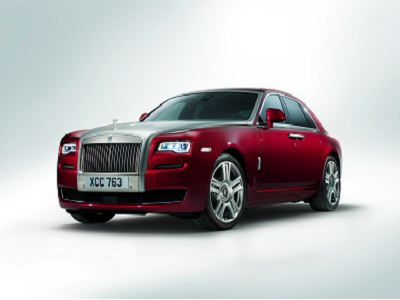 Rolls-Royce, British ultra-luxury car manufacturer launched its latest offering called Ghost Series II in the Indian automobile market at a price of Rs 4.50 crore. The firm has pitched for lower taxes in the country in order to spur the growth into the ultra luxury car segment. The car was initially seen at the Geneva Motorshow this year and has now officially been launched in India.

For Rolls-Royce, the Indian market is pretty significant, though it is not as large as the Chinese market. The auto maker has already set up 5 dealerships across the country and is in plans to expand its presence further in the coming years.

The Ghost Series II has come with subtle changes on its exterior and interior along with the addition of new features. The changes on the outside include updated bumpers and headlamps. The new LED powered headlamp features an unbroken daytime running light that has the ability to accentuate the look of the vehicle. Also, there are 21 inch alloys with new rear bumper and paint shades.

On the interior, the Series II gets new seats with redesigned electronic adjustments and heating options. The rear seats are re-angled subtly to augment communication with fellow passengers. There are marginal changes to the instrument cluster along with a new infotainment system with a 10 inch screen and a touchpad controller. The leather, wood and alcantara decorated interior can be customized in numerous combinations as per the owner’s desire.

There is a 6.6 litre V12 engine in the Rolls-Royce Ghost Series II that delivers 563 bhp of power and 780 Nm of torque respectively. The vehicle is mated to an eight-speed automatic transmission that will enable the car to hit a top speed of 250 km/h and accelerate from 0 to 100 km/h in just 4.7 seconds. The Ghost Series II is available either with standard 19-inch wheels or optional 21-inch forged wheels.

Passionate In Marketing - July 2, 2020
0
When the demand for hand sanitizers rose, considering the spread of COVID-19 brought about by the novel coronavirus has led to an...