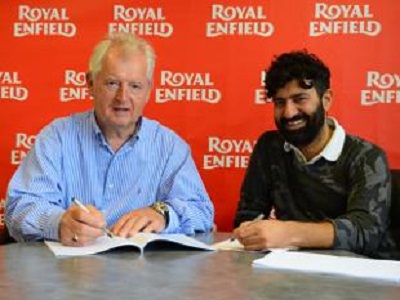 On Monday, Royal Enfield, a subsidiary firm of Eicher Motors acquired Harris Performance Products Ltd. based inUK. The latter is a motorcycle design and engineering company for a hidden amount.

Harris Performance and Royal Enfield had a long standing relationship and the former is responsible in the chassis development of the iconic Continental GT café racer model of Royal Enfield. Though the acquisition has been confirmed, the firms have not revealed any word on the value of the deal.

Regarding the acquisition, Siddartha Lal, CEO of Royal Enfield stated that Royal Enfield is working on a new generation of products and platforms. The dedicated work of Harris Performance team with the firm will undoubtedly enhance the engineering and product design capabilities of the firm.

Harris Performance was established by brothers Lester and Steve Harris around forty years ago. The firm is one of the leading experts in the designing and manufacturing of specialized high performance motorcycle chassis and components.

As per the terms of the deal, Royal Enfield will obtain all the assets, trade names, intellectual property, employees and technical know-how that were Harris Performance Products Ltd.

Siddartha also added that their proven expertise, understanding of motorcycling and deep insight and Royal Enfield will be invaluable in the journey towards attaining the leadership in the global mid-sized motorcycling market segment.

Alongside successful relationships with the Royal Enfield brand, the UK based Harris Performance has been the sole maker from the region to have been officially commissioned by Suzuki and Yamaha to design, develop and make race bikes for the World Superbike and Grand Prix.

Passionate In Marketing - March 18, 2013
0
March 18, 2013: Godrej Consumer Products has always been a well accepted name in the insecticide market and they have made their presence felt...

Micro SUVs to gain traction in India in 2016

Nielson data estimates FMCG revival, but not in reality

Jabong to focus on premium lifestyle products to cut down losses