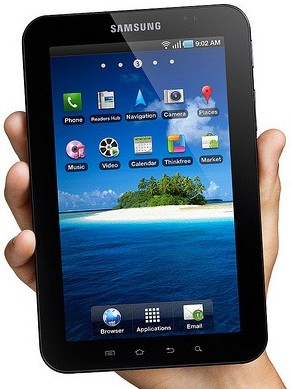 May 2, 2013: As the competition in the tab market hots up, Samsung has unveiled its new 7 inch screen Galaxy Tab 3. Galaxy Tab 3 comes in both 8 GB and 16 GB variants and has got 1GB RAM. The tab supports microSD card which helps the user to expand its memory upto 32 GB and it has also got various connectivity options including Bluetooth 3.0, microUSB 2.0 and Wi-Fi.

The new 7 inch Samsung tablet which measures 9.9 mm on the sides is powered by a 4,000 mAh battery. One of the models of the new Galaxy Tab 3 supports 2G and 3G based voice calls as well apart from having internet connectivity and messaging options. The tab boasts of a 3MP rear camera and 1.3 MP front camera which enables the users to indulge in video chatting.

In the beginning only the wi fi version will be available in the market and come June the 3G version will be rolled out. Galaxy Tab 3 has got a TFT screen with 1024x600p resolution and is powered by Android 4.1 (Jelly Bean). It has got a 1.2 GHz dual core processor which makes the computing fast. The price of Samsung Galaxy Tab 3 is rumoured to be around Rs.13,500, though official confirmation about the price of its variants is still awaited.

Akhil S Kumar - March 6, 2021
0
Motorola is calculating to launch Moto G10 Power and Moto G30 in India soon. The smartphones were earlier launched in the European...