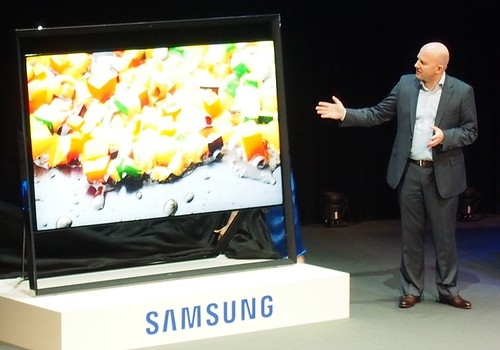 March 2, 2013: Samsung unveiled a host of new gizmos as part of its strategy to carve out a new segment from its various verticals. Samsung unveiled Galaxy Note 510 tablet, a smart TV, F5100 and an evolution kit that upgrades the existing Smart TV’s. The new Samsung TV has a unique feature where in the TV can be controlled by waving on it. The new evolution kit for the Smart TV’s bought last year will upgrade the model in addition to changing the screen. It will also have a remote which can take written commands as part of the upgrade kit.

These new gizmos were launched by Samsung at the Consumer Electronics Show being held at Las Vegas recently. The company has not yet announced the prices of these devices and it is expected that these products will be rolled out in India in next few months. The company also unveiled a future generation product, the F5100 TV at the Samsung Forum 2013. The uniqueness about F5100 TV is that it allows users to share content with the help of multiple devices using USB. This eliminates the need of a computer for sharing.

In India, Samsung is looking forward to carve out a new segment i.e. enterprise business as well and they are targeting 10 per cent of its revenue from this segment. Samsung as part of enterprise business strategy would be focusing on healthcare, retail, infrastructure, information technology and mobility segments.

Passionate In Marketing - June 30, 2020
0
Some of the well-known brands have announced that they won’t advertise on Facebook, to show solidarity against hate, speech, racism, misinformation, and fake news. The...