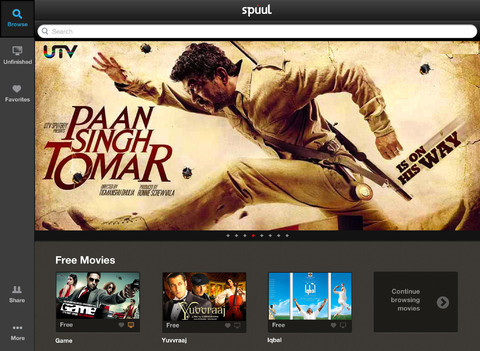 Dec 9, 2012: In a time when every producer, director and actor want to get into the Rs.100 crore club and people talk about big-budget blockbusters, there is a category of movies which might go unnoticed as these big-budget movies take away the major chunk of theatres. Small budget movies always face an onslaught from the big-budget movies but there is a growing market for impressive small budget movies. Small budget movies are now trying new methods to increase their viewership and now many a small budget movie producers are looking forward to release their films on Spuul.com which is fast becoming a preferred online platform for streaming movies and as well as TV shows. A release on Spuul will mean greater convenience for viewers to watch the movies whenever they want and will also give a longer shelf life to movies. Some of the movies getting released on Spuul include, ‘Ata Pata Laapataa’, ‘Fatso’, Gali Gali Chor Hain’ etc. Viewers can also watch popular Bollywood movies like Rang De Basanti, No One Killed Jessica and may others on Spuul through its free and paid plans.