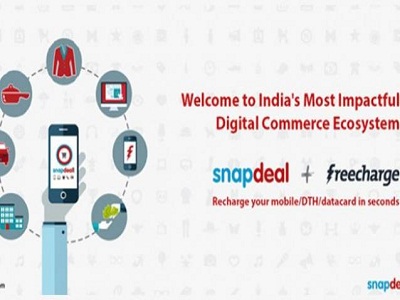 The e-commerce portal Snapdeal has acquired FreeCharge, the online mobile recharge platform. This acquisition is considered the biggest ever buyout in the Indian internet sector. In this move, Snapdeal arms itself with new and fresh grenades as it battles with its rivals to gain leadership in the sector.

As of now, theDelhibased firm has not revealed any details regarding the financial terms of the transaction. However, the sources close to the firm have revealed that Snapdeal has paid over Rs 2,800 crore in terms of both cash and stock.

Regarding this, Kunal Bahl, Co-Founder and CEO of Snapdeal claimed that the firm is interested in targeting the users who access the internet. The acquisition is believed to help the firm to enhance its ability to acquire users rapidly at a low cost.

Bahl led these negotiations for FreeCharge for a month’s time. He added that both the firms together represent the largest mobile commerce firm inIndiafor now. Snapdeal founded in 2007 began selling printed coupon booklets and later it changed its model of business seven times until it entered the online marketplace. The firm has received funding from SoftBank inJapanand eBay.

This deal of buying FreeCharge has marked Snapdeal’s entry of Sequoia Capital that is the significant shareholder in FreeCharge. Also, it is the most prolific investor in the country in the last year.

FreeCharge has raised around $116 million from investors including Sequoia Capital, Sofina, RuNet, Tybourne Capital Management and Valiant Capital Management. The firm founded in 2010 has been estimated to have 10 million users and buying it will eventually increase the number of potential customers for Snapdeal.

Recently, Snapdeal made a deal by acquiring the fashion portal Exclusively.in and also it invested in logistics firm GoJavas. It purchased a majority stake in RupeePower, a financial services player.

Bahl noted that there are 2 million to 3 million transactions happening in the space per day and it is expected to go up to tens of millions. He added that the acquisition of FreeCharge will help Snapdeal in driving its high-frequency customer acquisition and transaction velocity.