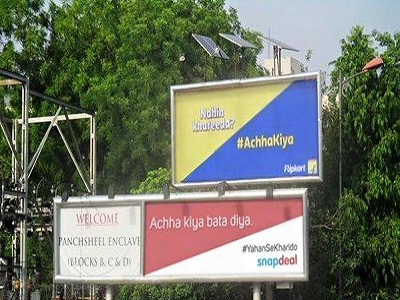 Snapdeal has come up with an intense marketing drive as the firm has taken over around 100 billboards across 20 cities about the upcoming sale. Snapdeal has come up with a campaign that has the catchline ‘Achha kiya bata diya, #YahanSeKharido in the last week. This campaign is a counter to its rival Flipkart that has been advertising ‘Nahin Khareeda? #AchhaKiya’ on the television and hoardings for nearly a week.

Now, Snapdeal has positioned these hoardings besides the ones of Flipkart to maintain the continuity in the two messages. Samsung is not viewing this campaign as an ambush one.

Regarding this, a spokesperson from Snapdeal claimed that the firm is young and its marketing communications across the channels show its facets as a brand personality. The main objective of this is to connect and engage with their customers. This message is inviting the customers to make their purchases on Snapdeal.

Regarding this, Santosh Desai, a brand expert claimed that customers are entertained when such campaigns have an element of humor in them. He stated that customers have others things to take care in their routine life. This looks like the two brands or their brand managers are talking to one another.

The advertising industry insiders claim that Snapdeal has looked for more number of such billboards at the prime locations, but it had to force itself to restrict as there was lack of availability. Most of the billboards have been taken for a couple of days or three.

This rivalry between Snapdeal and Flipkart has got viral in social media as well. There are similar hashtags in Twitter and Snapdeal is trolling the #AchhaKiya hashtag of Flipkart with #YahanSeKharido hashtag.

Regarding this, Atul Shrivastava of Laqshya Media Group claimed that the idea of ambush advertising has worked pretty week in the out-of-home media and it has proved how you are watched on the OOH medium.