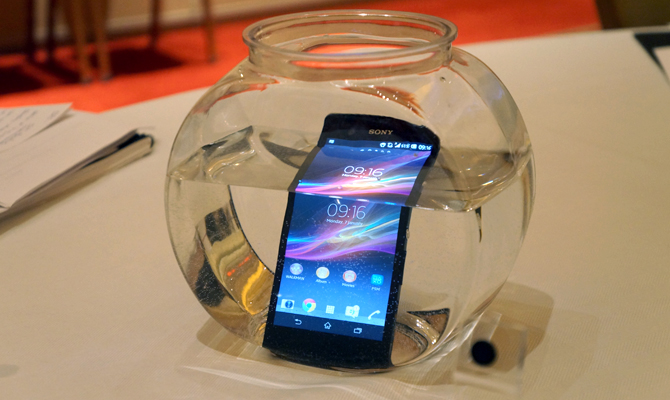 Jan 11, 2013: Sony unveiled its latest smartphone Xperia Z at the Consumer Electronics Show 2013 at Las Vegas. Experts after seeing the smartphone believe that Sony has an Ace up the sleeve with Xperia Z. The new Xperia which is an Android powered smartphone with Android 4.1 is powered by Sony’s Mobile Bravia engine. The phone has got 5 inch full HD display and has got quad core processor. The smartphone gives out some high quality images with its 13 megapixel camera as well and the images that come out are as if it has been shot with a high end camera. This has been made possible because of Exmor RS sensor which allows users to take some jaw dropping snaps even in poorly lit environment. Xperia Z also has got HDR video and boasts of a 1920 by 1080 display. The phone has got 2 GB of RAM and will be available in black, white and purple colours. One of the unique features of this smartphone is that it is water resistant and it can be in water for more than 30 minutes. In fact Sony XperiaZ was unveiled in a water container.

Passionate In Marketing - July 4, 2020
0
J.K. Cement Limited is an India-based holding organization found in 1918. The Company is occupied with assembling concrete and concrete items. Its...