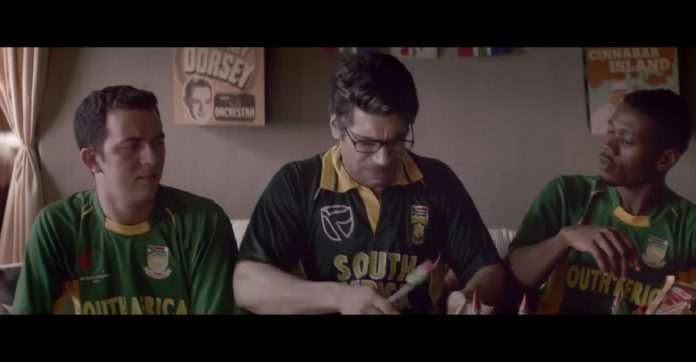 In this ad teasing the India VS UAE match’s preview, a Pakistani fan puts on the jersey of the South African team during the previous match betweenIndiaandSouth Africa. When the Indian team won the World Cup jinx, the Pakistani fan throws his Protea’s jersey back to the other fans. Meantime, the door bell rings, and a fan supporting the UAE match withIndiaoffers him a jersey of the former team to support them against the Indian team.

Star Sports is onto a great advertising franchise with Mauka ads. Shudh Desi Endings has created a name for it by spoofing the Mauka ads of Star Stars. These spoof ads are made by creative Indian animators and ad makers, and it gives them an opportunity to curl the plot of the ad slightly to make it better.

In this latest spoof ad, everything is similar to the original Star Sports teaser ad till the point when the door bell rings. When the Pakistani fan opens the door, he gets shocked to see Virat Kohli wearing an Indian jersey. He offers an Indian jersey to the supporter and trashes the UAE supporter as well.

You must really watch this spoof of the India VS UAE Mauka ad that is meant to by funny, and it promotes the India VS the World campaign.

Talking of the UAE cricket team, it comprises of both local players as well players from Indian, Pakistani and Sri Lankan origin. These players who are not of the UAE origin are residing in the country for over ten to 15 years, and UAE is their home. So, the team’s skipper Mohammad Tauqir claimed that there will be no issues such as Indians VS India at the match.

Passionate In Marketing - August 24, 2013
0
August 24, 2013: What is common between Angry Birds and Parle Products? Definitely one being both are popular. Parle in its bid to increase...

Mahindra & Mahindra and Snapdeal Tie Up to Push New Scorpio...

Advertising Industry in India Likely to Grow by 9.6 Percent in...