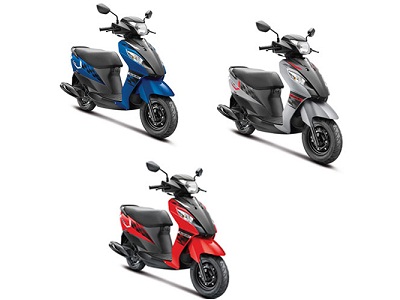 Suzuki Motor Corporation based in Japan is a leading two-wheeler maker in the world. The Indian subsidiary of the manufacturer, Suzuki Motorcycle India has unveiled the new variant of the Let’s scooter. This new 110cc scooter is strong and bold and it is meant to appeal to the youngsters in the country.

Regarding this new two-wheeler, the Executive Vice President of Suzuki Motorcycle India, Atul Gupta made an official statement. Going by the statement of the executive, Let’s is the most favorite scooter of the Indian college going youngsters. He stated that the new and revamped look of the vehicle is meant to cater to the needs of the younger audience and to appeal to them.

He further claimed that the bold new form of the Let’s is expected to create an universal appeal. This new look of the two-wheeler is a part of the continuous efforts that are taken by the manufacturer, Suzuki Motorcycle India to render fresh offerings in the market. Eventually, this will increase the options that are available for the customers.

The new variant of Let’s is launched in three lively dual-tone color options with matte black finish. This design gives a contemporary look to the scooter. Also, the variant has new body graphics with black wheels that gives a trendy and sporty look to the scooter. The new model is powered by a compact, light and fuel efficient engine with 110cc capacity. This engine makes use of cutting edge SEP technology.

Suzuki Motorcycle India has priced the Let’s at Rs 51,000 in the country. In an attempt to increase the sales of Suzuki, this new model of Let’s might play a crucial role. The two-wheeler market in the country is growing, and Suzuki has achieved 33 percent increment in the sales so far this year in comparison to 2014. Hence, it is believed that the Let’s will help the manufacturer get a stronger sales this time.

Get ready for Knorr and Maggi Oats