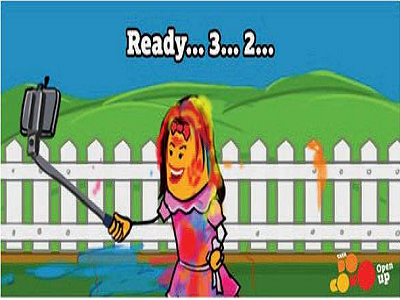 On the day of Holi, service provider Tata Docomo posted a tweet of a picture of an animated girl clicking a post-Holi selfie. It also invited its followers to post their best Holi pictures. In three hours of this, three different brands from different categories joined the initial selfie and they are Bajaj Electricals’ Morphy Richards, ITC Bingo and Godrej Expert.

Each of these brands established their reason for photo bombing the selfie. ITC’s Bingo brand brought in snacks, Godrej Expert gave a trial of their hair color after Holi and Morphy Richards provided hair dryer for the post Holi celebration shower.

Notably, this is the first time that for the brands to join together and organize a multi-brand social party in the country. It was Tata Docomo’s Twitter handle, @tatadocomo to play the host in this party and the same was organized by the digital agency ibs. Regarding the same, Sabyasachi Mitter, Managing Director at ibs claimed that it was very difficult for the firm in braining brands onboard as they had to provide relevant replies to questions such as ‘who was the leader of the activity’, ‘how a brand will end up with another one’ and so on.

The entire plan along with the artwork for the follow-up tweets that were approved in the three-day program by every brand involved in the process. Notably, for niche brands such as Morphy Richards, this social party was an opportunity to be seen in the same association as Bingo and Tata Docomo.

Moreover, such activities help amplify the presence of a brand and help it reach a wider audience without having to plead for retweets, claims Sunil Kataria, COO of Sales, Marketing and SAARC at Godrej.

Also, Vice President of Marketing at ITC Food, GK Suresh claimed that while a hashtag or a brand promotion is customized, its capability to trend and create critical mass is definitely no certain.

The prime advantage of such social media campaigns is that they are less time consuming and provide a great positive buzz as well. While this is a three-day process, an usual add will take 90 days to go on air.

Author - January 12, 2022
0
By the New Year, the prices of air conditioners and refrigerators have increased due to the rise in material costs and higher...