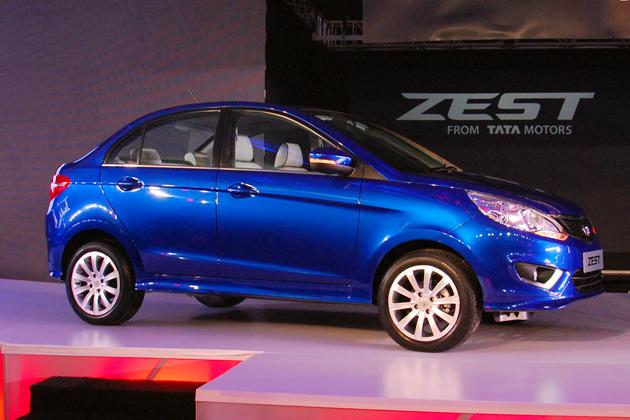 August 1, 2014: Tata Motors which off late has been going through a lull phase is betting on its two new model launches, the Zest and the Bolt. The India’s biggest automaker by revenue which dominates in the truck and buses segment has seen its market share drop to 4.2 per cent at the end of June from 10.2 per cent two years ago. Tata Motors’ domestic business has posted losses in four of the last eight quarters.

Tata Motors would be first launching a sub 4 metre sedan, the Zest. Speaking about the launch of Zest, Ranjit Yadav, Head of Passenger Vehicles, Tata Motors was quoted as saying to Reuters, “The Zest is the first step and an important proof point of what we want to do with our passenger vehicle business. We have taken some hard calls in the last 12 to 18 months to set right our fundamentals.” Tata’s domestic car sales fell 39 per cent year-on-year in the year that ended on March 31.

The launch of new models is seen as an attempt by Tata Motors to regain market share and ward off losses. Tata Motors with this launch is also trying to project a cool image for its cars which has earlier been marred by an image that its cars are not cool because they are used as taxis. Earlier Tata cars were perceived to be cheap cars and because of this it lost favour with buyers. Though some experts believe that it’s a well calculated risk which Tata is taking by launching a compact sedan but there are still some who believe that it will take a long time for the company to stabilise.

As part of its major expansion plan and renewed focus on Indian market, Tata Motors plans to launch two new vehicles every year until 2020. The launch of Tata Zest will be followed by the Bolt hatchback later this year

Godrej & Boyce enters into technology collaboration with Bosch and Siemens...

Elder Pharmaceuticals ties up with Kose Corporation to sell cosmetics in...

Microsoft Excels over Exxon in Becoming Second Most Valuable Firm