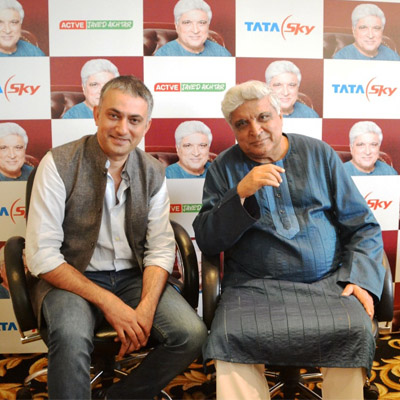 TataSky, the leading direct to home service providerhas announced the launch of a poetic literature based interactive service called Active Javed Akhtar. For the same, the DTH operator has entered into a partnership with the celebrity lyricist, Javed Akhtar and this would help the consumers to avail an expanded range of distinguished content. The service is aimed to re-introduce Indian literature in a contemporary style.

Under this service, Javed Akhtar will be reading out poetry and dohas written by poets from the past including Rahim, Ghalib, Mir and Kabeer. These poems and dohas will be sung by contemporary artists as well.

Besides the partnership with lyricist Javed Akhtar, TataSky has also joined hands with music television channel Insync in order to collaborate with the music composers and over 50 playback singers to create innovative and original songs that will be meant for the Actve Javed Akhtar service. Besides the video format, viewers can learn the meanings of Urdu and Sanskrit words used in the dohas and shayaris via the on-demand application.

Regarding this upcoming service on DTH, Vikram Mehra, TataSky Chief Commercial Office revealed that they at TataSky want to provide distinguished content for their subscribers by launching new services every few months to keep their consumers well experienced. On this particular service, the operator has spent over a year’s time and work was mainly involved in selecting the poetry, shooting it with Javed Akhtar and combining them all with music.

The executive of TataSky also stated that the operator is well prepared for the launch of this service as they already have prepared a huge amount of content and everyday some new content will be added for the sake of the subscribers.

Regarding the investment for the new Actve Javed Akhtar service, Mehra claimed that these are obviously big ticket items and there will be a huge advertisement campaign by TataSky for this service. The interactive poetry service was launched for a monthly subscription fee of Rs 99 per month.

Direct to home service provider Tata Sky is a joint venture between Tata Group and 21st Century Fox. There are over 13.5 million customers and almost 29 percent of them use one Actve service or the other.