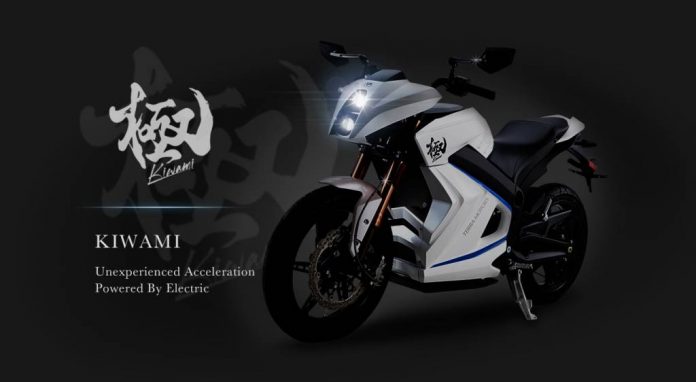 May 23, 2014: Japanese manufacturer Terra Motors Corporation known for manufacturing electric two and three-wheelers in Japan announced its debut in Indian market with the launch of Kiwami electric superbikes which according to the company can compete with 1000cc superbikes in terms of performance. Kiwami which means ‘Ultimate’ in English is powered by a 13PS electric motor and can attain a top speed of 160 km/hr.

Kiwami priced at Rs.18 lakh though generates power equivalent to 125 cc motorcycle but due to clever engineering the performance it gives is equivalent to a litre class superbike. Even though it has a higher torque this handmade superbike from Terra Motors can run upto 200km on a single charge which is first of its kind in India.

On the occasion of the launch of Kiwami in India, Toru Tokushige, Chief Executive Officer (CEO) and Founder of Terra Motors was quoted as saying, “India is the second largest producer of two-wheelers in the world. Hence it is an important market in our strategic growth plan and we intend to invest Rs. 300 million in the Indian market next fiscal year. With this mission, Terra Motors is set to deliver electric vehicle (EV) of high quality and services in the tradition of what consumers in India come to appreciate and expect from the Japanese industry.”

The company plans to introduce its range of e-scooters and three-wheeler options in the upcoming 2014 Auto expo. With companies like GoGreen BOV also in the fray, it remains to be seen how Terra Motors with its premium pricing makes a mark in the Indian market.