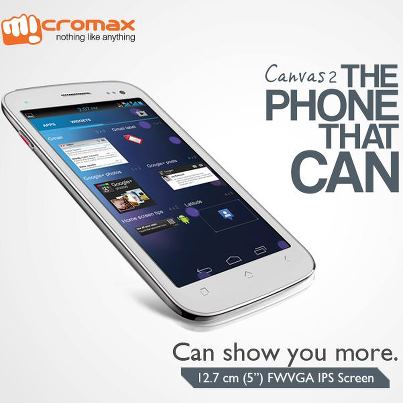 The Canvas 2 handset of Micromax has started rolling out in the markets and it is sure to compete with other smartphones in the market. Micromax has banked on the skills of Lowe Lintas to create a 45 second ad-campaign with tag line “The Phone that can”.

The ad features a protogonist who faces number of questions on his temporary stay at various places. Can

The ad then ends conveying a message when there are so many questions with Can, why can’t an answer be Can. This gives the tagline “The phone that can”.

For people who use phone more as a lifestyle accessory, Canvas 2 can be a better pick. The ad campaign was created to signify its importance as a lifestyle accessory. It also says that Canvas 2 is better than many other phones in the market. The ad is based on a world trotting man, who just goes on visiting every country. The worldly wise man uses his phone as his best companion in each step of his journey. Micromax is also trying to release its second ad on Canvas2 in the following weeks.

There was also a campaign released by Micromax, the Indian Company, mocking the South Korean mobile giant Samsung. Micromax posted this ad for its Ninja smartphones. The ad parodies the Samsung Galaxy Y ad where a girl asks a man “Kya apke paas nahi hein, Uncle?” The Micromax ad gains momentum from the point the Samsung ad ends. This time the phone in the girls hand is ridiculed by guys of her age, pointing each bit of the device. The conversation ends asking “Why y?” Really don’t know if Micromax in this ad is trying to bite off more than what it can chew by challenging the South Korean giant.