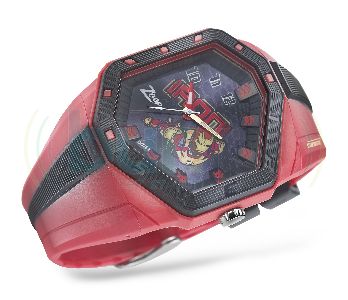 April 28, 2013: Iron Man 3 which is one of the most awaited movies of this year got released this Friday and has opened with rave reviews. Cashing in on the popularity of Iron Man series, Titan Industries Ltd has joined hands with Marvel Comics Group who owns the character Iron Man and has announced the launch of Iron Man 3 collection watches. In a perfect case of co-branding Titan would be launching the limited edition watches featuring Iron Man through its kids range ZOOP.

With this launch Titan is trying to move ahead with the proposition of ZOOP ‘Be Cool’ and trying to connect with kids. Mr. Ajoy Chawla, VP, Titan on this association with Marvel was quoted saying, “This unique association with global brands like Marvel will present to our little consumers a range of exciting products that are inspired by their favourite Superheroes.” Roshini Bakshi, MD, Disney TV- Consumer Products & Retail said, “We are extremely excited to announce our association with Titan for Marvel Super Heroes collection of watches for our fans in India”

Titan ZOOP Iron Man watches which are priced at Rs.895 would start selling from May 2013 onwards. These ZOOP watches which comprise of 8 special editions would be available in Red, Blue & Yellow colours for both young boys and girls. This tie up is considered as an amazing opportunity for kids to own products which features their favourite super heroes. What next, is it going to be watches featuring Hulk?