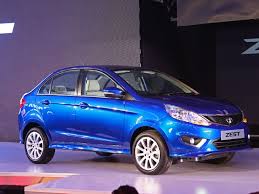 Aug 14, 2014: Tata Motors has launched the Zest compact sedan in both petrol and diesel variants. The ex-showroom price of the petrol version starts from Rs 4.64 lakh and the diesel version of the same starts from Rs 5.64 lakh. The Tata Zest comes in five different variants namely, XE, XM, XMA, XMS and the top-shelf XT version that comes with daytime running lights. The brand new Zest lineup of Tata cars comes with the same design language as the carmakers previous models, but it looks more stylish and upmarket.

Talking about the mechanical aspects, the Zest is powered by the new Revotron 1.2 litre turbocharged petrol engine that renders 88.7 bhp and 14.27kgm of torque. This system is mated with five-speed manual transmission as well. There are three driving modes such as Eco, City and Sport along with 1.3 litre Fiat sourced Quadrajet diesel engine. In addition, the manual gearbox is paired with an automated manual transmission (AMT) option.

The Tata Zest will be a tough challenger to the Hyundai Xcent and Maruti Suzuki Swift Dzire. When it comes to engine, the Maruti offering comes with a 1.2 litre petrol engine that can pump in 87PS of power and 114Nm of torque. A similar engine in the Xcent churns out 83PS power than the Swift Dzire and the same torque. However, the Tata Zest is the only offering in this class with a turbocharged engine that can deliver a massive 90PS of power and 140NM torque with its 1.2 litre petrol engine. The credit goes to the water-cooled turbocharger that spins with minimum delay.

When it comes to the diesel variant, the Zest again delivers the highest possible figures with 90PS power and 190Nm torque with its 1.3 litre engine as compared to the Xcent and Swift Dzire.

Another significant aspect in which the Tata Zest dominates is the size and space domain. Well, the entry-level sedans are all aimed at delivering huge space and this is the major factor that attracts the consumers. With this in mind, Hyundai and Maruti have made the Xcent and Swift Dzire with spacious design, long wheelbase and good ground clearance. In terms of space, the Xcent appears to be too large with 407 litres and the Swift Dzire is too cramped with only 320 litres of boot space. But, the Zest stands in between with a moderate 390 litre boot space.

On the features front, the Tata Zest comes with standard remote unlock feature, parking sensors and Bluetooth connectivity. The lack of reverse camera is compensated with a Daytime running projector headlamps and LED tail lamps.

Author - January 14, 2022
0
Tesla CEO Elon Musk has shared an update approximately Tesla's access into India. His reaction got here after a Twitter consumer who...