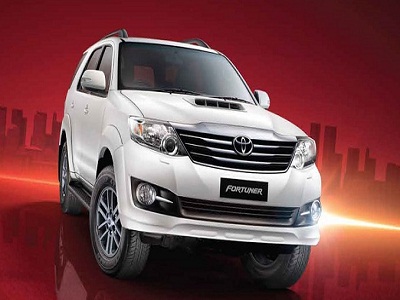 Today, Toyota Kirloskar Motor announced the launch of an updated variant of its renowned multi purpose vehicle Innova in the price bracket between Rs 10.51 lakh and Rs 15.80 lakh that is the ex-showroom pricing in New Delhi. The auto maker also announced a new variant of Fortuner 4×4 Automatic premium sports utility vehicle.  This is priced in the range between Rs 24.17 lakh and Rs 26.49 lakh.

The previous automatic variant of Fortuner was a two wheel drive (2WD) model and the updated variant comes with 5 speed automatic gearbox with 4×4 model. Powering this is the same 3.0 litre, four cylinder, diesel unit that can render 169 bhp. On the whole, the Fortuner is available in four variants such as 4×2 Manual, 4×4 Manual, 4×2 Automatic and 4×4 Automatic apart from the TRD Sportivo bodykit version. On the other hand, the latest variant of Innova comes with entire range of features such as front SRS airbags. Otherwise, there are no changes made to this new model.

During the launch, Toyota Kirloskar Motor (TKM) claimed in an official statement that the launch of the new variants of Innova and Fortuner 4×4 Automatic coincides with the commemoration of the manufacturer’s successful expedition of celebrating ten years of launch of its flagship brand Innova in the country.

Regarding this, Toyota Kirloskar Motor (TKM)’s Director and Senior Vice President of Sales and Marketing, N Raja claimed that both Innova and Fortuner are trend setters when it comes to the Indian automobile market. He added that alongside launching these new variants of popular models, the firm is delighted to announce that it has emerged as the first auto maker in the mass segment to have standardized front SRS airbags across all its models in all grades.

He further stated that safety is always the prime concern and it is give utmost importance to the offerings of the maker. It was claimed that they are working on incorporating airbags in all their models.

Micromax to launch 30 smartphones in 2013