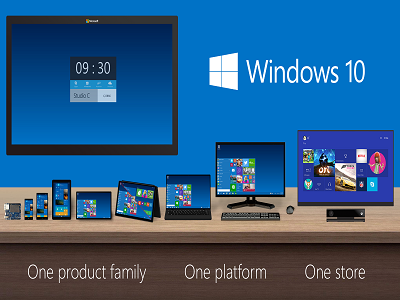 Windows 10 is official and it is coming to the end users in the coming months. Microsoft pulled back the curtain on the operating system at an event on Wednesday and the iteration comes with numerous consumer friendly features. The ultimate idea of the operating system is to provide a singular and unified experience across different device form factors.

Interestingly, Windows 10 will be free for users of Windows 7 and Windows 8 to upgrade and hence, it can reach a wider user base. Also, the platform has features that will enable it to render a smooth user experience. Notably, the addition of the Start menu is an added attraction and it is capable of expanding to full screen if the user desires. There are several other features of the Windows 10 platform and they includeActionCenterwith enhanced functionality.

Below, we have listed the new features that are a part of the Windows 10 operating system. Have a look at them below.

The familiar Start menu is back, but it has new customizable space to house the favorite apps of the users and Live Tiles. Apps from the Windows Store is also available in the same format that desktop apps do and they can be resized and moved around.

Microsoft’s Cortana digital assistant will move from Windows Phone to Windows 10. Cortana will be in the task bar next to the Start button on the desktop and it can perform many basic tricks as in the Windows based smartphones. Cortana can be interacted with via text or voice queries as in the smartphones.

Spartan is the codename of the web browser and it is new to the Windows 10 platform that replaces Internet Explorer. The browser is lightweight and clean and it is built using a new rendering engine. Spartan browser has a note taking mode to annotate webpages, reader mode and many others.

Surface Hub is an unexpected aspect to be launched by Microsoft and it is an 84 inch 4K touch screen display as well. This hardware lets sharing the presentations with remote attendees. Also, there is a motion sensor, camera, speakers, microphone, Bluetooth and Wi-Fi on Surface Hub.

Alongside Surface Hub, Microsoft has also announced another hardware called Windows Holographic that is a set of technologies including headset, new Windows 10 technology and a HoloStudio dev application. This will bring insanely intense augmented reality capabilities to Windows.

Windows 10 will function effectively on all devices form factors such as smartphones, tablets, desktops and hybrid devices. The OS features Continuum that can detect when the keyboard of a hybrid device is moved and switches to a touch optimized UI with big tiles. There is a universal app marketplace and Microsoft has demonstrated apps such as Calendar and Office with common UI elements to function across different devices.

With snap enhancements, around four applications can be snapped to the same screen in a quadrant layout. Windows will list out the other apps and programs requiring additional snapping and smart suggestions on filling available screen space with other open apps.

There is a new task view button on the taskbar of Windows 10 that will provide quick switching between open files and quick access to any desktops created by the user.

Creating various desktops for different purposes and projecting and switching between these desktops easily. Interestingly, the users can pick up a desktop from where they left and it will be intact.

Author - January 11, 2022
0
As we all know, once again our nation is witnessing the spike of the third wave of Covid, the omicron surge and...