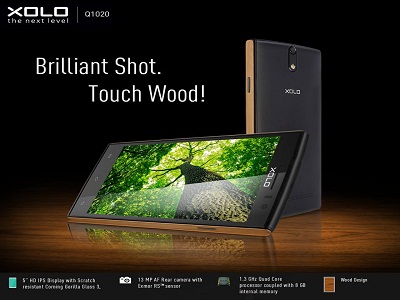 Nov 15, 2014: Xolo is one of the India based smartphone makers that is known for launching innovative offerings with cutting edge technologies and innovative designs. The vendor was in the headlines for its HIVE UI. Now, the firm has announced the launch of Xolo Q1020 smartphone with wooden frame along its sides. Interestingly, the pricing of the device is kept reasonable at Rs 11,499 to lure the consumers who are looking for a difference.

Elaborating on its specifications, the Xolo Q1020 is given a 5 inch IPS display that boasts of a screen resolution of 1280×720 pixels translating to a pixel density of 294 pixels per inch. The screen is strengthened with the Corning Gorilla Glass 3 protection that makes it scratch resistant.

Under its hood, the smartphone houses a quad-core MediaTek MT6582 processor clocked at 1.3 GHz aided by 1 GB of RAM. We have already seen this hardware combination in many smartphones in this price bracket and hence, it is clear that the Xolo Q1020 will render a decent overall performance. To meet the storage requirements of the users, there is 8 GB of native storage capacity that can anytime be extended externally by another 32 GB with the help of a micro SD card.

Fueled by Android 4.4 KitKat operating system, the Xolo Q1020 arrives with standard connectivity aspects such as 3G, Wi-Fi, Bluetooth 4.0, GPS and dual SIM functionality. Also, there is support for HotKnot file transfer that is similar NFC. The HotKnot feature was introduced by MediaTek to take on NFC by bringing it to cheapest smartphones. Furthermore, the device also supports lock screen gestures and incorporates a 2,100 mAh battery that will provide up to 13 hours of talk time and 454 hours of standby time respectively to the Q1020.

Reshma R Nair - April 5, 2021
0
Money appeals to everybody. However, not everyone makes it of their own volition. People make errors. There is...