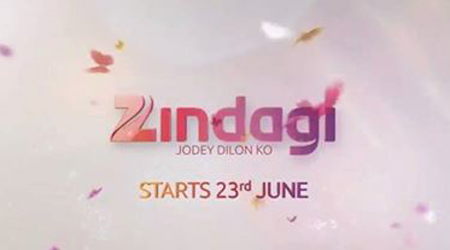 May 20, 2014: Zee Entertainment Ltd. would be launching a all new mass entertainment channel (GEC) christened ‘Zindagi’ on 23rd June 2014. The channel which will air shows produced overseas including Pakistan and is an attempt by the channel to make international content across borders to be mass ready. Positioned as a channel for entire family Zee Zindagi has chosen the proposition ‘Jodey Dilon Ko’.

Speaking about the launch of the new GEC channel Zee Zindagi, Punit Goenka, MD and CEO, ZEEL, was quoted as saying, “The launch of Zindagi is significant in many ways. It is a step forward to further expand the ZEEL Network in India and overseas. This channel is a first in its category of GECs and another first that Zee is trying to bring to its viewers. It will offer alternative fiction content suitable for Indian sensibilities and produced by content creators from around the world. We believe that culture and talent should not be bound by any barriers.”

The channel has already started test signals and in the first phase fiction content from Pakistan which are culturally relevant for Indian audience would be aired. Zee has acquired 4,000 hours of content from various producers in Pakistan. Speaking about the content Mr.Goenka said, “Firstly, we identified content which culturally suits this market, and therefore, the audience will accept it. The idea is not to get foreign content for the sake of getting foreign content. It has to be imported from markets that have affinity with the Indian market. That includes Pakistan, Turkey. We have identified Egypt as another such market and maybe Latin America, as we move forward.”

Zee recently has recently taken off channels like Zee Trends and ETC Punjabi in the last quarter and they would be doing it with more channels which don’t have commercial viability. Zee is looking forward to pull out all stops to distribute aggressively in the GEC space, the market share of which has increased from 34 per cent in 2008 to 40 per cent in 2013. Zee would be soon starting a 360 degree marketing campaign involving all the media for the launch of Zee Zindagi.