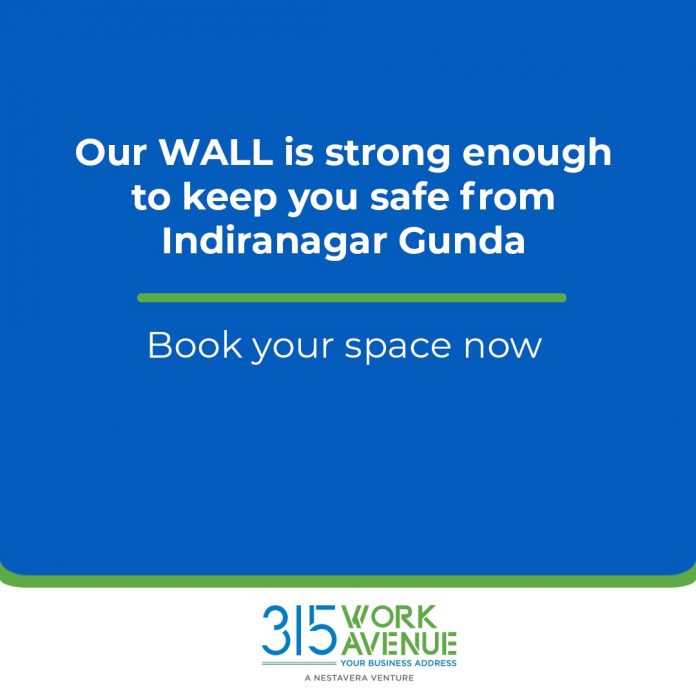 Bangalore, April 12, 2021: If there was one thing netizens were bowled over this weekend, it was Rahul Dravid for his dramatic appearance as ‘Indiranagar ka Gunda’ in an advertisement. Otherwise known for his cool persona, a commercial managed to do what the fiercest bowlers and toughest competition couldn’t – get Rahul Dravid to lose his cool ! To acknowledge and pay tribute to his extra-ordinary new image and skill of acting by the cricket legend, 315Work Avenue, a leading coworking space provider, came up with witty responses to the new campaign. The company expressed how safe their working space is, from Gundas, especially in Indiranagar, where the company has its presence. It highlighted that, ‘Our WALL is strong enough to keep you safe from Indiranagar Gunda: book your space now’. The other reply talked about safety: ‘Safest Work Place in Indiranagar: Could protect from angry Gunda too’.

Commenting on the same, Mr. Manas Mehrotra, Founder, 315Work Avenue said: “The always affable Dravid laughing and shouting, smashing rear-view mirrors and throwing coffee, is a brilliant play on his persona. The less than 15 menacing seconds on-screen ad transforms the public image of the former captain of the Indian national cricket team. We could not have imagined that India’s wall would one day be an Indiranagar Gunda. As a cricket lover and a fan of Rahul Dravid, we are in awe of the most unexpected character. We came with our response as we wanted to pay an ode to this fantastic campaign and we made sure that we played with words to match the tempo!”

Rupesh Pal - May 1, 2021
0
We all know that many of the car manufacturers began with petrol engines and then shift to diesel. The native-like Mahindra with...