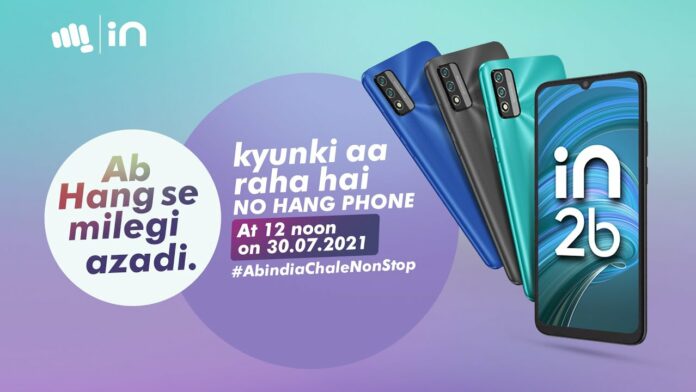 India, August 25th 2021: Micromax Informatics Ltd. India’s very own smartphone and consumer electronics brand launched ‘India ka No Hang Phone’ – IN 2b in July 2021. Micromax went to the grassroot level with the ‘Ab India Chale Non-Stop’ campaign to understand the concerns of the common man- to identify their current pain points and bring them a product that enables them to do more in their everyday lives.

Driven by the brand ethos which has the common Indian at the heart of everything they do, Micromax brought together four individuals from different walks of life – a food delivery executive, a cab driver, a student and an aspiring content creator – real people with real problems who were instrumental in not just the launch but also the development of the product.

Micromax is IN for India – and has worked closely with Indian consumers to give them the best and safest experiences, without compromise. With the ‘Ab India Chale Non-Stop’ campaign – Micromax is the first ever smartphone brand to bring not celebrities or hired actors, but the hardworking Indians from amongst us at the helm to navigate the launch of their new smartphone – IN 2b.

From the pre-launch phase to the launch event, real people were involved at every level of the   campaign- they brought to life the consumer insights which were transformed into the final product. The build-up to the launch event kicked-off with video snippets of the brand going on ground zero and interacting with consumers about the problems they face in everyday use of their phones. Micromax IN 2b was launched by Rahul Sharma, Co-Founder Micromax India along with four people who represented the voice of the consumers.

The launch video addressed different concerns that were highlighted by them in their conversation with Rahul, and he demonstrated how Micromax IN 2b was the perfect solution for each one of them with a powerful ARM Cortex A75 architecture based Octacore processor or blazing fast performance without any lags, a 6.5” Mini drop HD+ super bright display, a clean software with Micromax’s promise of ‘no bloatware, and no advertisements’ and camera features like Play and Pause recording, FHD Video recording and Bokeh Effect.

Speaking about the campaign Rachna Lather- Marketing Head, Micromax India said, ‘As an Indian brand, we understand our consumers’ very well and their feedback drives us to do better, which is why we deep dived into their world to understand what they needed. We wanted to hear from the common man – the digitally native Indians whose livelihoods are dependent on smartphones, to understand and bring solutions to address their concerns. They are our true heroes and the face of our brand, because they represent the spirit of India and with the IN 2b we have developed a product that will make their daily lives and work simpler and will ensure that Ab India Chale Non-Stop.’

Micromax IN 2b’s campaign started 20th July (Teaser 1, Teaser 2, Teaser 3 & Teaser 4)  and the launch video aired on the brand’s Youtube Channel on 30th July 2021 , and the smartphone is available on Flipkart and micromaxinfo.com

The campaign has resonated well with the mass Indian audiences and resulted in the product flying off the shelves since the sale date. The Micromax team is working hard to replenish stocks every week.

Author - December 1, 2021
0
Health & Glow a leading beauty and personal care in India has appointed Tute Consult, an Integrated Communications industry as its communication...