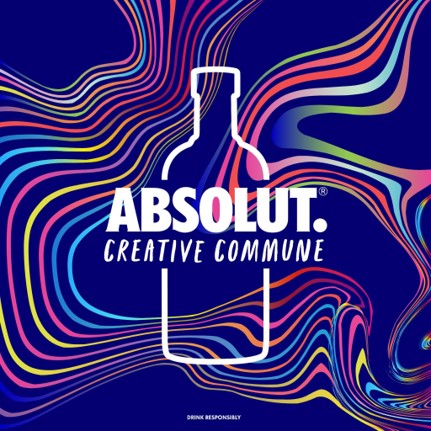 India, January 18, 2022 – Absolut unveils an inspiring new campaign – Absolut Creative Commune – with an aim to champion an open and harmonious world and create positive change through art. In a world where  societies are fragmented, Absolut Creative Commune will act as a catalyst to generate a positive change, stimulate conversations, and engage with a wide audience in a creative, unexpected and meaningful manner. As a part of the campaign, the artists will creatively exhibit their iteration of culturally relevant beliefs such as gender equality, global unity, freedom of expression, sustainability and inclusivity, in line with the ethos of Absolut.

The artists of Absolut Creative Commune stand for an Absolut world – a world without biases – with a commitment to create a wave of change through their art pieces. The campaign brings the ethos and values of the brand as well as the ‘Born Colourless’ campaign to the forefront.

The artists who are the pillars of the campaign, have intricately woven their artworks with beliefs they strongly stand for, beliefs that Absolut as a brand celebrates. Khyati Trehan, a graphic designer by day and a 3D-visual artist by night, has created a virtual kinetic installation bringing forward the thought that we are all human despite our differences. With his digital art piece for Absolut Creative Commune, Tarqueeb who is a visual artist has expressed synergy between nature and the modern world, and how they can co-exist. A multi-disciplinary artist, Osheen Siva has created an animated artwork celebrating solidarity amongst women from diverse spheres of life. Daku, who experiments with dimensions of time and space, has curated a time lapse of the shadow of a 3D sculpture made of typography that embraces freedom of expression and the complexity and diversity of the world we live in. A community of cis and transwomen spreading awareness through public art projects, Aravani Art Project’s wall mural for Absolut Creative Commune depicts a world which is more empathetic and open towards the LGBTQIA+ community.

Through this campaign and an open contest, Absolut will encourage aspiring artists to come together and share their interpretation of one of the 5 beliefs using the iconic Absolut silhouette. The budding artists will have the opportunity to collaborate with one of the artists of Absolut Creative Commune and to design an art piece. Creating a holistic experience, the initiative will include a powerful talk by artist Osheen Siva on ‘Achieving Fearlessness for Women through the Power of Art’. She will address the audience through Absolut’s Instagram handle on 27thJan’22 followed by a workshop by Aravani Art Project around ‘Art and Identity’ on the same platform on 5th Feb’22.

With Absolut Creative Commune, the brand envisions to spark a movement to ‘Create Better Together’ and stir purpose-led dialogues in the society.

Commenting on the launch of Absolut Creative Commune, Kartik Mohindra, Chief Marketing Officer, Pernod Ricard India, said, “Absolut has always been a front-runner in leading with purpose and creating a wave of positive change. With digital platforms acting like a connecting window today, Absolut Creative

Commune harnesses the strength of virtual public space that allows for an immersive and accessible experience. The artists along with their artwork are the voice of Absolut Creative Commune and together we will bring the ethos of the campaign to the forefront, hence connecting with the youth who will be the crusaders of change.”

Commenting on the launch of Absolut Creative Commune, Khyati Trehan said, “Working with Absolut Creative Commune challenged me to imagine a colourless world and turn its meaning on its head; from colourless meaning devoid of colour, to being inclusive of all while reminding us that we are more in common. In that same vein, my abstract virtual kinetic installation deconstructs the Absolut bottle to celebrate our diverse layers, while pivoting around a common centre.”

Commenting on the launch of Absolut Creative Commune, Tarqeeb said, “For Absolut Creative Commune, my intention was to get people to reflect on the meaning of sustainability t and how crucial it is for our society to give nature a chance to recuperate. I had a great time interpreting my topic in the current context of a post-pandemic world. This artwork is my take on how society will need to adapt and change to preserve our planet for generations to come.”

Commenting on the launch of Absolut Creative Commune, Aravani Art Project said, “As an Art Collective working towards Transgender and LGBTQIA+ community by creating consciousness and well-being through art, awareness & social participation, we were glad to collaborate with Absolut Creative Commune. We created an artwork based on one of the brand’s values which was close to our own art practice celebrating queer friendship and reminding people that all expressions of love are equal and free.”

Commenting on the launch of Absolut Creative Commune, Osheen Siva said, “The collaboration with Absolut Creative Commune was inspired by the need for equal rights and representation. It reflects on the necessity of equality for all genders, for our society to be inclusive and progressive. I was happy to work on this project as it touches upon the causes that are close to my heart – such as solidarity, feminism, and togetherness.”

Commenting on the launch of Absolut Creative Commune, Daku said, “My work for Absolut Creative Commune is an amalgamation of different scripts from all regions of India. It’s beautiful to see how connected and intermingled these cultures are which celebrate ‘Freedom of Expression’. When the light falls on the sculpture, it creates shadows that overlap and separate to create forms, just like the people and their culture.”

Author - May 20, 2022
0
A digital pair of Gucci shoes, of course, that may be personally possessed, and finally, a digital drink, not tasted but certainly...