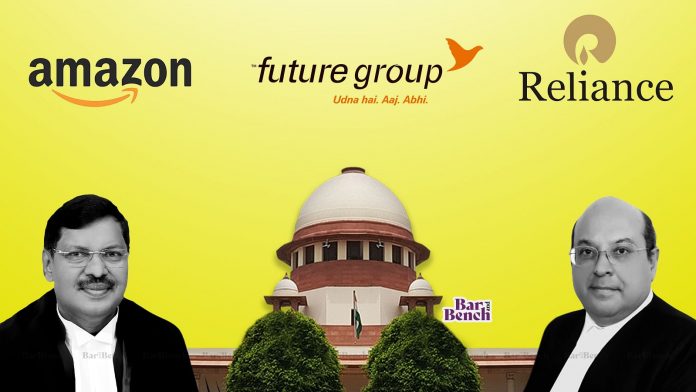 The agreement has been the subject of a heated legal battle between Amazon and FRL, with the latter arguing in the Supreme Court that the EA award was legitimate and enforceable. The Supreme Court has upheld e-commerce behemoth Amazon’s challenge to Future Retail Ltd (FRL) Rs 24,731-crore merger with Walmart. The Supreme Court upheld a Singapore arbitrator’s ruling from October, which placed the merger on hold after finding substance in Amazon’s concerns.

The agreement has been the subject of a heated legal battle between Amazon and FRL, with the latter arguing in the Supreme Court that the EA award was legitimate and enforceable. “We will therefore be deciding whether or not the judgment by EA falls within section 17 (1) of the Arbitration and Conciliation Act (that deals with the interim awards that are made by arbitral tribunals). If so, may it be enforced under section 17 (2) of the Act? “The bench had spoken something.

On the 20th of July, the Supreme Court, which had previously recommended the National Company Law Tribunal (NCLT) not to issue a final ruling regarding regulatory clearances for the FRL-RRL merger, began hearing the final arguments. Amazon has joined Kishore Biyani & 15 others, that includes Future Coupon Pvt Ltd (FCPL) and FRL, in a bundle of lawsuits contesting a Delhi High Court division bench ruling which paved the way for the merger.

The single-judge order ordering FRL and different statutory agencies to maintain the status quo on the mammoth transaction was delayed on February 8 by the division bench. That was in reaction to FRL’s appeal of a single judge’s judgment in favor of the US company on February 2, which ruled that the EA’s award was genuine and enforceable.

Amazon has initially filed a petition in the high court (single judge) seeking execution of the EA decision issued by the Singapore International Arbitration Centre (SIAC) on October 25, 2020, preventing FRL from proceeding with the merger with Reliance Retail.