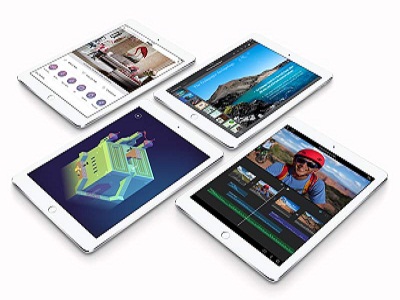 On Thursday, the Cupertino based tech titan Apple unleashed its latest generation tablet models, iPad Air 2 and iPad Mini 3. The pre-orders for the same will debut from today.

Talking of the iPad Air 2, the sixth generation iPad features a TouchID as in the newer iPhones and measures 6.1 mm in thickness making it 18 percent thinner than iPad Air. It carries the credits for being the first golden finish iPad and comes with enhanced retina display and ultrafast wireless connectivity.

The new iPad Air 2 is powered by the second generation 64 bit A8X processor and has a battery that is claimed to render 10 hours of backup to the slate. It is also claimed that the display on the iPad Air 2 features an anti-reflective coating that minimizes the reflections by 56 percent. Also, the slate can render 180x improved graphics performance than the original iPad.

When it comes to the imaging hardware, the iPad Air 2 boasts of an 8 MP primary iSight camera and a new FaceTime HD camera at the front. Apple claims that there is a new sensor with larger f/2.2 aperture, enhanced face detection, burst selfies, HDR videos and photos and the best viewfinder.

The iPad Mini 3, on the other hand features a 7.9 inch retina display and it is heavier than the first generation model, but still uses notable hardware enhancements such as 64 bit processor and twice the RAM capacity. The inclusion of the TouchID fingerprint scanner is a big addition to the miniature tablet. It also features a 5 MP primary iSight camera with support for FHD 1080p video recording and HD FaceTime front facing camera.

Apart from unleashing the iPad Air 2 and iPad Mini 3, Apple announced the Apple Pay feature that will be made available from October 20. The firm also launched the operating software for its Mac series called OS X Yosemite with updated Messages, iTunes and iWork.

Passionate In Marketing - August 14, 2014
0
August 14, 2014: Bangalore based firm Ezetap that is venturing into the mobile payments in the emerging markets has made it possible for numerous...

Digital media advertising surging ahead in 2012

E-tailers in India take on to Twitter for customer engagement and...