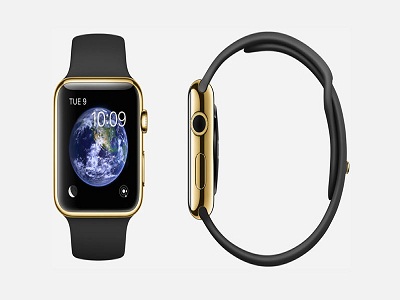 September 11, 2014: Apple unveiled its first smartwatch at the September 9 event alongside the iPhone 6 and iPhone 6 Plus. To be precise, Apple the launched a raft of smartwatches by combining three different Apple Watch categories, couple of face sizes and a selection of straps. On the whole, there is a possibility to see 34 different Apple Watches that can suit the consumers.

Despite the slew of smartwatches and fitness trackers available in the market, the Apple iWatch has the potential to leave an impression with its plastic wristbands that looks appealing and fashionable.

Moreover, usually smartwatches do not fit everyone as they large enough to comfortable sit on smaller wrists. But, this appears to be one segment wherein Apple has shown its design expertise by making it available in two different sizes that would appeal to the masses.

Instead of trying to please everyone with a single design, Apple has come up with three basic varieties that are focused at different groups of users. The Watch Sport is a rugged model that has a strengthened Ion-X glass face and it is the lightest of the trio. The Apple Watch is the smaller version that is suitable for ladies, in general users with smaller wrists. The Apple Watch Edition features a gorgeous 18 karat gold case in yellow or rose gold variants. It also comes in a fancy leather box that doubles as a charging cradle.

It appears like Apple wants its consumers to purchase multiple watch straps and change them as it uses easy strapping mechanism to change the bands effortlessly. For customization, there are numerous watch faces that users can choose from and some of these are animated as well.

The design expertise of Apple is one of the aspects that make the Apple Watch standout as the other factor is the user interface.

The problem with the existing smartwatches is that the UI is packed with a tiny display and the users will have to manipulate each of the tiny elements with their fingers and this is inevitable. Here comes the Digital Crown to alleviate this issue. This new feature is actually the incorporation of a dial on the side of the watch that is featured in the conventional watches. The Digital Crown solved the problem allowing the users to make use of the crown to zoom in on the interface and easily scroll through the content on the watch face. Like a home button on the iPhone, users will have to press on this to return to the home screen.

The smartwatch will distinguish between a regular tap and a harder press that are used to select icons and access contextual menus respectively. This technology is called Force Touch and it is possible with the tiny electrodes that are embedded in the display. It will let the users to swipe the screen to access details such as location, calendar and weather that are termed mini apps Glances.

The watch incorporates Taptic Engine that enables it to tap the user’s wrist to alert about notifications. These notifications could be for messages, navigation and more. It is just like the vibrate function on the iPhone that will vibrate to notify a message or call.

Siri on the Apple Watch

The other feature that users can make use of to interact with the Apple Watch is via Siri voice assitant. All the user has to do is raise their wrist and say “Hey, Siri” or press and hold the Digital Crown and dictate messages or request turn-by-turn directions.

Apple showed off its own Activity app that uses three circles to show how the users meeting their targets to burn calories. The Move ring displays the calories burned, the Exercise ring shows how active the users are and the Stand ring keeps track of inactivity. There is also a Workout app that show how far, how fast, and how long the user has been exercising and the app syncs with iPhones as well.

The watch has a near-field communication, or NFC chip, Secure Element chip to store the encrypted information and sensors to measure blood pressure and distance traveled. Users can control the music playing on the iPhone via the watch or even play music stored on the watch itself. Apple claims the Apple Watch is water resistant as well. Finally, the touch screen is covered by a sapphire crystal that will make it scratch-resistant.

This is not the first smartwatch to be launched in the market, but what it does seem to have some aspects that will make it better than the competition. Apple appears to have paid enormous amount of attention to every detail of the watch. The Apple Watch could become the smartwatch that makes the benefits of wearable technology evident to the masses.