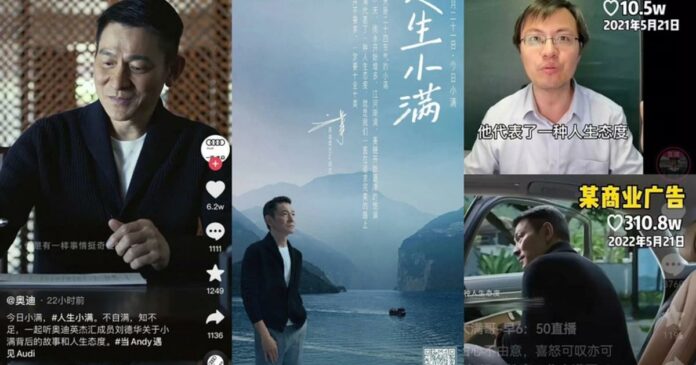 FAW Audi, the Volkswagen Group and FAW Group’s joint car brand in China, is being chastised by Chinese netizens for an ad that reportedly plagiarises information from a Chinese influencer on Douyin. Since its debut on the morning of May 21, the ad, which stars Hong Kong actor Andy Lau, has received over five million likes on Lau’s Douyin account.

The film was released on Xiaoman, a major day in the lunar calendar that marks the beginning of a new solar term. Beidamange, the influencer, accused Audi of plagiarising lyrics from an original poetry he wrote and sung on his account in order to usher in xioman 2021.

He recorded a video to voice his displeasure with the ad, saying, “The poetry was written by myself.” When citing [it], please consult the original author.” Since the disaster, Beidamange has garnered 1.2 million Douyin followers, and he claims the business failed to speak with him before exploiting his work.

Audi has took down the ad and issued the following statement in response to the outrage on Chinese social media: We deeply regret the anguish caused to Mr. Andy Lau, Beidamange, and other parties in the situation as a result of insufficient supervision and evaluation.

M&C Saatchi, a creative agency, presented and produced the video. In reaction to the outcry on Chinese social media, Audi has taken down the commercial and made the following statement: We truly regret the agony caused to Mr. Andy Lau, Beidamange, and other parties in the situation as a result of poor oversight and review.

The film was presented and developed by M&C Saatchi, a creative agency. We are not dodging the issue, but we have directed M&C Saatchi to address the copyright violation as soon as possible and deliver a satisfactory response to the public. Until all facts are clarified, all videos will be withdrawn from official Audi channels.

M&C Saatchi, the London-based independent agency network behind the video, also issued a statement (translated to English below). Many of M&C Saatchi’s offices in Asia-Pacific are minority-owned by local operators who run their agencies with less global oversight than larger ad holding corporations.

M&C Saatchi is now undergoing a buyout attempt from Next15 for US$387 million, which was accepted just three days ago. The Audi Xiaoman is our Audi service crew.