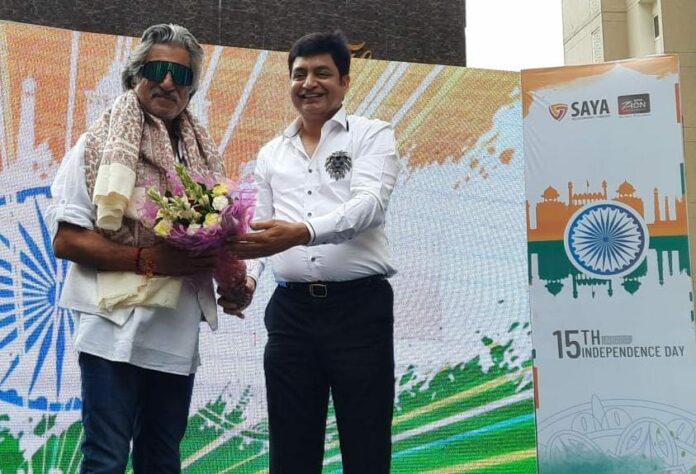 Delhi-NCR, 16th August, 2022: A leading developer in the Delhi-NCR region, SAYA Homes, observed the true spirit of freedom with a grand celebration, on the occasion of the 75th Independence Day. The ceremony started with a celebratory flag-hoisting in the morning, followed by fun activities scheduled in the evening for residents at SAYA Gold Avenue in Ghaziabad and SAYA Zion in Greater Noida West. Shakti Kapoor, a well-known Bollywood actor, was the event’s keynote guest who added a lot of fervour and patriotism.

As patriotism reached its pinnacle, people were commemorating the martyrs and applauding the military’s sacrifices to defend us every day. People’s emotions were filled with pride as they commemorated the hardships and experiences that this day represents for every Indian citizen. The event saw participation from children and youngsters as well.

Fueled with the spirit of Independence, Mr. Shakti Kapoor, Bollywood Veteran, said, “Today is a significant day for India, and I think the “Har Ghar Tiranga” campaign has been incredibly effective— I feel an estimated 80% of households have raised Indian flags in their houses. Residents here have shown a lot of love for one another, and I would want to see that love spread throughout all of India. My advice to the Indian people is to stick together, to love one another, and to create ‘One India’.”

Commenting on the occasion, Mr. Vikas Bhasin, Director, SAYA Homes, said, “Independence Day holds so much respect in our hearts. We are incredibly appreciative of the freedom warriors who sacrificed so much to free the country from colonial oppression. SAYA Group’s celebration was a token attempt on our part to remember their bravery and courage. Organizing such events and celebrating this day, not only energize the residents but also make the atmosphere peaceful and pleasant. The support and encouragement we receive from our residents inspires us to improve each year.”

The ceremony ‘SAYA Ki Udaan’ was conducted in accordance with the COVID-19 safety protocols like social distancing and other precautionary norms. The festivity started in the morning with a flag hoisting ceremony, which culminated in more celebrations in the evening that featured live performers, as well as dancing, sketching, painting, and sports competitions. Highly regarded musicians Shivaya Band and Sanam Singh gave live performances at SAYA Gold Avenue in Ghaziabad and SAYA Zion in Greater Noida West, respectively. The chief guest, Shakti Kapoor, presented the awards to the competition winners.

Shakti Kapoor is an Indian actor, who is known for playing villains in Bollywood movies for more than three decades. With a small role in the movie “Ranjit Khanal,” he made his acting debut in 1975. Since then, he has been in more than 300 movies. He had frequently been nominated for the Filmfare Award in the category of the most comic performance.

He appeared in numerous popular movies during his career, including Andaaz Apna Apna, Raja Babu, Khiladi, Aankhen, Judwaa, Coolie No. 1, and many others. Shakti was also a regular fixture in Priyadarshan films like Hungama, Hulchul, Chup Chup Ke and Maalamaal Weekly. Additionally, he took part in TV reality shows – Nach Baliye’s third season in 2007 and Bigg Boss’s fifth season in 2011.