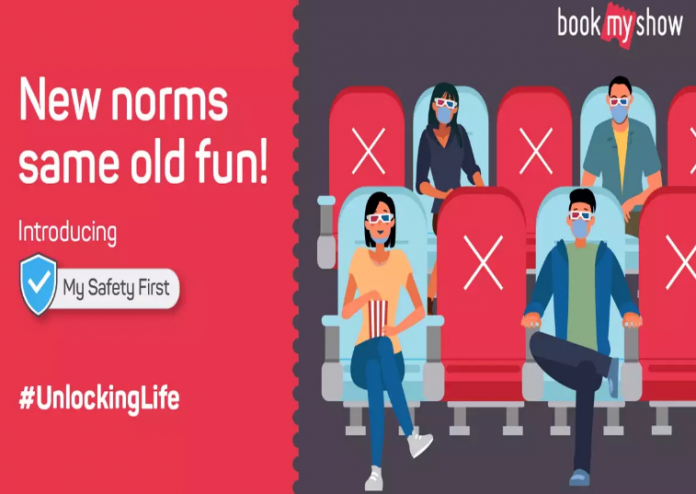 BookMyShow has launched the “My Safety first” feature on their site by partnering with cinema partners across India. The feature was introduced with the aim of making the customers aware of the safety and hygiene measures followed by cinemas.

This feature will show the different measures taken by the cinemas in India, it ensures the users that they can enjoy their movie while being secure and following the safety measures, which starts from the ticket booking till the users finish watching the film, as people are more concerned about their safety due to the current situation.

With this feature, the Bookmyshow site will help the customers to know about the different safety measures followed by the cinema halls. Through the launch of this feature, the company wants to promote a message in the minds of the users that the company is concerned about their safety and that the cinema halls will function very safely following all the rules and regulations while keeping the safety of the audience as a priority.

The safety measures which are decided to follow in the cinema halls includes seat distancing, thermal screening, security check avoiding physical touch, providing hand sanitizers to the audience and staff, checking the temperature of the staff members regularly, providing foods and drinks untouched by hands and packed safely, limiting the number of people entering the restrooms.

The people have to wear a mask without option and practice social distancing, using sanitizers before entering the cinema hall, and before the start of the show, the cinemas should show the audience the different safety measures to be followed.

Chief operating officer-cinemas of BookMyShow, Ashish Saksena stated that the company focuses mainly on two aspects, one is the safety of the customers and the other is that the customers enjoy their moment while watching the film and by launching this feature the company wants to promote a message among the users that they can have their movie experience without any fear.

The company is excited to have associated with the cinema partners as they are ready to welcome the audience to watch the show by following all the safety and hygiene measures.

Passionate In Marketing - October 28, 2020
0
Sunfeast Dark Fantasy is a biscuit brand by ITC, and the official partner to the IPL team Royal Challengers Bangalore (RCB), has...