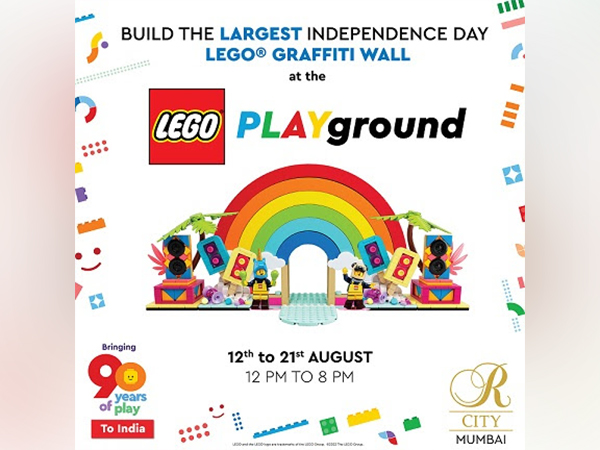 With its mission to inspire and develop the Builders of Tomorrow, the LEGO® Brand has a flurry of initiatives lined up to celebrate the importance & possibilities of PLAY coinciding with its 90th Anniversary!

Chennai, 10th August 2022: Ninety years ago, a Danish carpenter crafted a line of small wooden toys in his Billund, Denmark, workshop. His first collection had a modest 36 items that included cars, airplanes, and yoyos, all carefully crafted to help local children learn about the world. What Ole Kirk Kristiansen couldn’t have known back in 1932, was that the LEGO® Group would become one of the biggest toy companies in the world and inspire millions of children to play each year.

Twenty-six years after Ole made his first wooden toy, his son Godtfred patented the LEGO® brick we know today, with its interlocking tube system offering endless creative building possibilities. Since then, the LEGO® brick has been busy. From a few simple bricks in primary colours, the humble brick has formed the basis of over 18,000 LEGO products, received the Hollywood treatment in THE LEGO MOVIE™, helped children learn about robotics and coding through LEGO® MINDSTORMS®, and inspired hours of playful digital adventures in over 180 LEGO® video games. In fact, the “LEGO” name comes from two Danish words “Leg Godt”, meaning “Play Well. And the spirit of playing well is what the LEGO® Brand hopes to celebrate through a host of PLAY initiatives as part of their 90th anniversary celebrations!

From the launch of their celebratory brand film “We are all Builders”, to celebrating the importance of play through a host of influencer collaborations to LEGO® India’s largest play event with the first ever LEGO® Playground with a plethora of fun activities, passion-based play, Creativity corners, LEGO® Speed Champions Arena, Minifigure Mascot Meet & Greets, loads of LEGO® Goodies, endless play and the main attraction – The Largest Independence Day LEGO® Graffiti Wall – an ode to the 75 years of Independence of our beautiful nation! The First LEGO® Playground will be set up at R City Mall in Mumbai between 12th August to 21st August while September will see the LEGO® Playground go live in Delhi & Bengaluru as well!

Through the gamut of fun play activities peppered across the duration of the celebrations that will last for over 2 months starting August, the LEGO® Group endeavours to underline the importance of PLAY in our lives! In fact, in a study on play conducted in 35 countries polling over 55,000 parents and children across the world, 91% of Indian kids wished they could play more with their parents. Parents too believe in the crucial role of PLAY in Child development & the study found that almost all parents think children strengthen their creativity (93%), communication (92%), problem-solving skills (92%), and confidence (91%) while they play. When children play, they develop skills that help them thrive in a rapidly changing world!

And that is exactly why we need to PLAY more & often, hopefully every day!

“When my great-grandfather founded the company 90 years ago, he recognised that play could change the lives of children – it brings families together and helps children develop skills that can enable them to reach their full potential. He only had a small workshop, but he had big ambitions to ensure as many children as possible could experience the benefits that play brings,” said Thomas Kirk Kristiansen, Chairman of the LEGO Group. “Whether 1932, 2022 or on our 100th Anniversary in 2032, we strive to continue this legacy by helping all families, wherever they are in the world, to play well.”