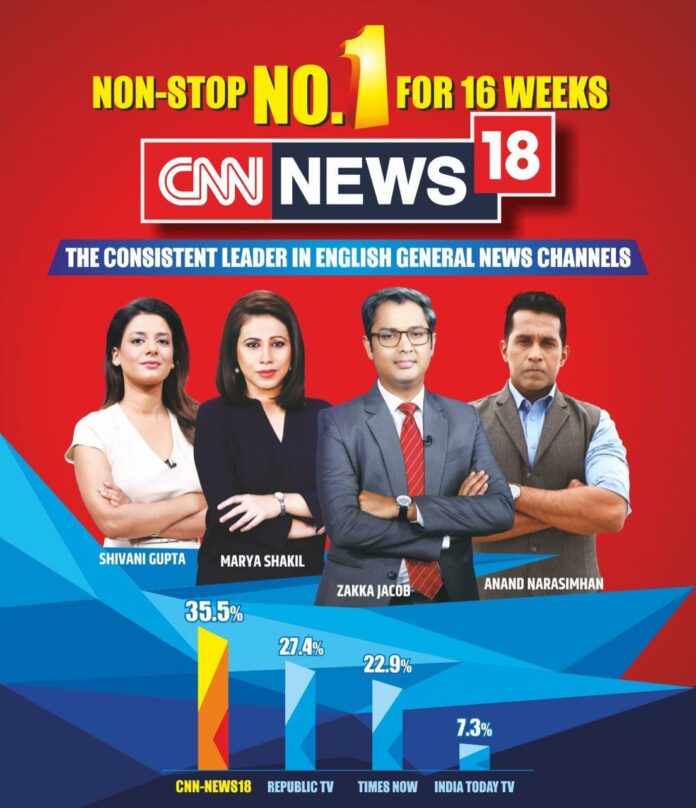 ·         Credible news continues to win over noise. CNN-News18 has been ahead of Republic & Times Now for 16 consecutive weeks across several segments

·         On the digital front also, the news channel has been performing consistently well. The traffic on News18.com, along with with the traction on the YouTube channel, remain high

New Delhi, 17th August 2022: CNN-News18 continues its dominance in the English TV news space as the channel has beaten Republic TV & Times Now by a wide margin for 16 straight weeks.

Even during Prime Time, CNN-News18 is ahead of competition.

CNN-News18 leading the BARC rating for almost four months is a testimony that audience prefer news over noise.

Whereas, the competition continues to focus on shrill narratives and shouting, CNN-NEWS18’s unbiased and clutter breaking reporting and coverage of all point of views has established new benchmarks in the news broadcasting sector.

The channel has gained viewership steadily because of the added focus on content and programming, along with broad-basing content to all geographies across the country.

Commenting on CNN-NEWS18’s achievement, Smriti Mehra, CEO, Business News, Network18 Group said, “Our strategy to broad base our programming and cater to all geographies of the country has redefined how news is done and the ratings substantiate it. Our focus has always been on capturing all aspects of biggest news stories of the day and conducting insightful debates that cover opinions from all spectrums. Breaking the existing mould of TV programming and providing ‘News Over Noise’ is what helped us emerge as an industry leader in the English News genre.”

On the digital front also, the news channel has been performing consistently well. The reader traffic on News18.com, along with with the traction on the CNN-News18 YouTube channel, remain high.

Sharing his thoughts, Zakka Jacob, Managing Editor, CNN-NEWS18 said, “CNN-News18 has been the number 1 channel for 16 straight weeks now. It’s an affirmation from our viewers about our brand of no-shouting, non-preachy journalism. We believe in giving all sides a fair say. We also believe in the viewers’ intelligence to come to an informed judgment without the anchor having to play judge and jury.”

On the marketing front, CNN-NEWS18 has rolled out a high voltage campaign by taking out full page jacket ads in publications such as The Indian Express, The Hindustan Times among others.