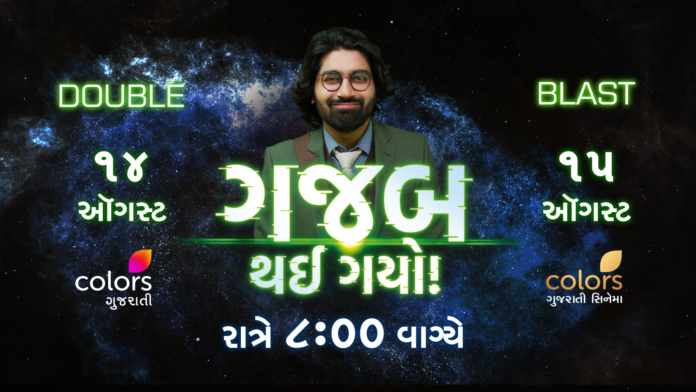 “Gajab Thai Gayo” is a Sci-fi comic movie to be enjoyed with entire family. It features our favorite Malhar Thakar. The movie based on Sheth Kapurchand Mangaldas Vidyalaya is one of the last existing Gujarati medium schools. Principal of the school wants to preserve his heritage and is struggling with the changing world. Bhagirath is a postgraduate from Princeton University and oﬀers to teach the students for free. Vishwa, principal’s daughter and a teacher herself doesn’t trust Bhagirath as his teaching methods are unconventional. Bhagat, Vishwa and Anant, students – Paheli, Virat travel to nearby village and their journey begins to achieve this goal. To witness this interesting journey please tune into Colors Gujarati and Colors Gujarati Cinema.

On this WTP Malhar Thakar said, “I am very excited about WTP of my movie. Audience have already enjoyed it in theater, and now they will get to see in their homes with their families. So, we will get the new audience as well as the repeat audience as everyone enjoys a good family entertainment like “Gajab Thai Gayo” in their drawing rooms”.

On the marketing front the movie will be heavily promoted on home channel and the channel will also explore promotions via reach and engagement activities through digital media. Audience will get to interact with the lead casts as well as through social media pages of the channel.

Tune in to Colors Gujarati and Colors Gujarati Cinema to witness a blend of comedy and science fiction on 14th and 15th August with the World Television Premiere of Gajab Thai Gayo.