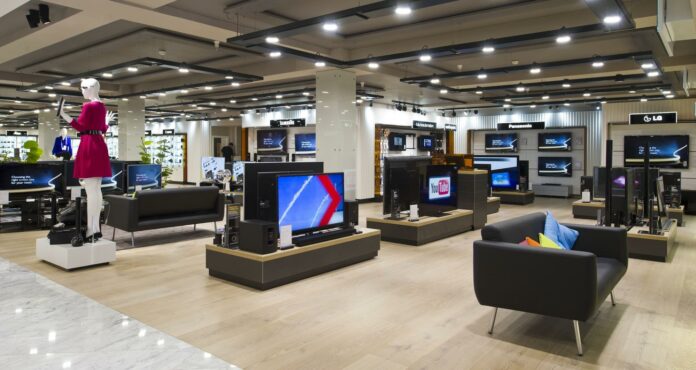 “The consumer electronics industry is seeing a transition in market share from unorganized to organized.” Market-share shifts have been accelerated by disruptions such as demonetization, GST implementation, and the pandemic. We believe that 30% of the business is still unorganized, which gives a major opportunity for listed Indian companies to further solidify their market position in the longer future.

We predict the organised sector will grow at a quicker rate, closer to the mid-teens over the next decade, aided by such market-share increases,” according to the report released on Monday. However, it stated that commodity inflation could affect demand and put pressure on company margins.

It stated that commodity inflation, demand slowdown, and a rising interest-rate scenario are all immediate threats. A robust real-estate cycle can help the sector, while a reversal in commodities inflation can help reduce margin pressure, according to the report.

As the epidemic caused people to spend more time indoors, demand for household appliances and consumer gadgets increased. As a result, demand for products like washing machines, computers, and other electronics increased. This would aid enterprises in achieving revenue growth of 22% year over year in FY22.

“While covid harmed revenues in 4QFY20 and FY21, the sector recovered quickly as pent-up demand was released. As a result, we forecast FY22 revenue growth of 22% (using Bloomberg consensus for non-covered companies), aided by a low starting point. We also anticipate revenue growth to return to its long-term trajectory.

According to the research, “we predict the same to happen by end-FY23 because seasonal products like air conditioners and air coolers have yet to endure a complete summer without lockdown.” It predicts that the revenue of ten consumer-durables companies grew at a double-digit rate over the last decade.

It also indicated that consumer durables are in higher demand in rural and small-town India. “According to numerous organisations, rural India is the next significant growth potential, driven by increased penetration.

The government’s rural electrification effort has improved power supply in Tier 3/4 towns and villages over the last five years, paving the way for the use of electrical products,” it stated.

Aditya Madhu - July 1, 2022
0
According to the top ad body's annual complaints report for 2021–22, influencer infractions were a factor in 29% of the advertisements that...