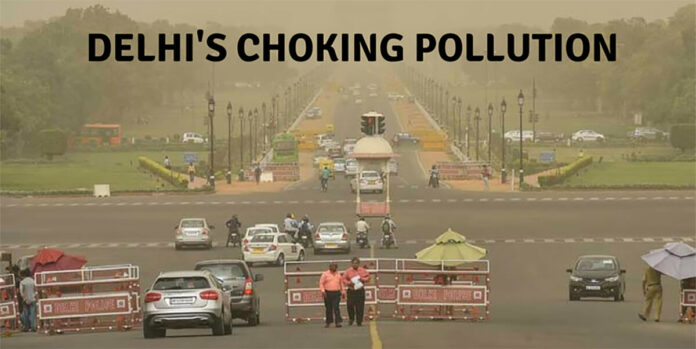 Air pollution is a major problem in India (both urban and rural), and Delhi is one of the most studied cities, receiving a disproportionate amount of media coverage.

PM2.5 (harmful tiny particles that can be inhaled) levels in the air are currently significantly over the World Health Organization’s global standards (WHO). In the last seven days, measurements in the Anand Vihar region of east Delhi continuously above 300 micrograms per cubic metre.

It is been attributed to a variety of causes, including the burning of farm waste, factory pollutants, traffic fumes, general weather patterns, and the Diwali explosions that light up the night sky.

Several governments have outlawed the sale and use of pyrotechnics during Diwali celebrations; however, many states have failed to enforce the restriction.

The concentration of PM2.5 in Delhi increased during Diwali in 2018, 2019, and 2020, according to a report from the Centre for Science and Environment, a non-profit based in Delhi. It’s also worth noting that not all fireworks emit a lot of PM2.5 particles, despite the fact that the bigger ones tend to have higher concentrations.

With Delhi suffering from severe air pollution, Environment Minister Gopal Rai outlined plenty of actions taken by the AAP government to combat the problem. In general, the smog becomes worse during the winter months.

In response to the recent harsh weather, the Delhi government has ordered that schools and universities will be closed indefinitely, construction will be prohibited, and government employees will be required to work from home until November 21.

Dabur, a leading FMCG brand, has published three full-page advertisements in the Times of India’s Delhi-NCR editions, warning citizens about how smog and dirty air cause infections and lung ailments.

The Dabur Chyawanprash advertisement emphasises how it protects individuals from the harmful effects of PM2.5. PM2.5, or fine particulate matter, is an air contaminant. When air pollution levels are high, it can cause a variety of health problems. Additionally, these particles limit visibility and make the air appear foggy.

According to an analysis by the green think tank Centre for Science and Environment, vehicles accounted for more than half per cent of Delhi’s pollution during the early part of this year’s winter, from October 24 to November 8. (CSE).

The CSE study, which was released recently, is based on real-time data on source contribution from the Indian Institute of Tropical Meteorology (IITM) in Pune’s Decision Support System for Air Quality Management.