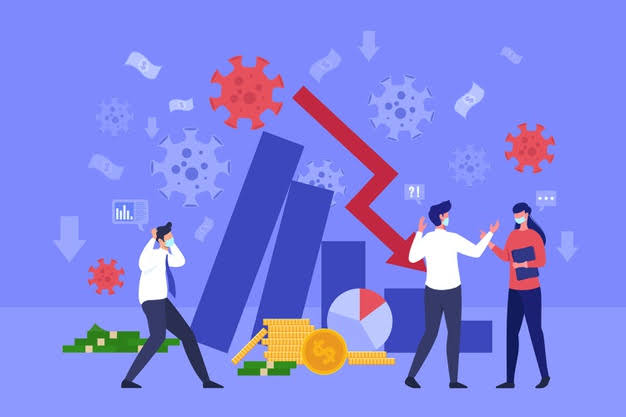 The outbreak of the second wave of Covid-19 across the whole country has urged the state government to impose partial lockdowns which are hurting the nascent economic recovery that was underway.
As the second wave continuously spreading in India, the Indian economy will likely see a sequential contraction in the July-September quarter, warned by many chief economists, cautioned that the impact will be heterogeneous, will affect key sectors like construction, trade, transport, auto-sales, power consumption, highway toll collection, manufacturing, and mining will likely remain the worst affected ones in fiscal year 22 too, as in Fiscal year 21.

With the arrival of 2021, when S&P Global ratings forecast Indian gross domestic product growth at 11% for the coming fiscal year, the number looked extremely achievable. But after the surge in covid cases in April -May the S&P has downgraded India’s GDP growth rate to 9.8%, the unemployment rate grew from 6% in March to 8% in April, the economic impact has already shown Nomura India Business Resumption Index (NIBRI) dropped to 90.4% in the week ending April 2021.

Push down by a heavy debt burden caused several quarters of augmented spending unmatched by non-debt receipts, cash transfers to labourers, street vendors, distributing free grains programme through Public Distribution System(PDS) the central government has limited medium-term options. Other drivers of the economy need to start firing sooner rather than later, but that has been wishful thinking for quite some time.
The expectation of utilization snag looks more perceptible now than last year, In contrast to a V-shaped recovery, consumption revived could look more U-shaped this year.

Amid unease over cost-pull or inflation, consumption inducement and continued uncertainty about the second wave of the COVID-19 pandemic, the Reserve Bank of India (RBI) is likely to hold the benchmark interest rate at the existing levels at its upcoming monetary policy meet to help the stagnant economy to revive and tends to progress faster and be stable.
Loosening of financial norms, adjustments in government spending and better coordination with States can spur a growth cycle of the economy includes cash transfers to low/middle-class families, credit guarantee funds, interest rate subventions, liquidity and refinance facilities, loan extension and forbearance, tax relief, deferrals and regulatory easing will spur the consumption growth as people switch to precautionary savings due to Covid-19 and create risk-aversion.

As per the Keynesian theory, if consuming goods and services does not increase the demand for such goods and services, it leads to a fall in production. A decline in production means businesses will lay off workers, creating unemployment. Consumption thus helps to determine the earning and output in an economy.

The economy will start to improve and grow once restrictions are eased and a spur in consumption growth. Then only GDP growth will return to positive territory in the quarter ending December 2021.