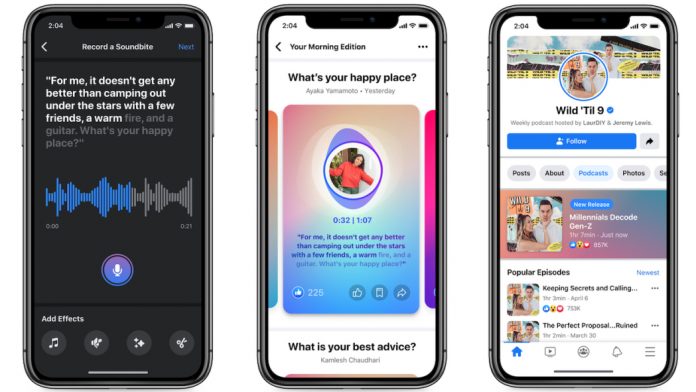 Facebook founder and CEO Mark Zuckerberg announced the company’s foray into the audio market, unveiling its plan to launch several upcoming innovative audio products. The key highlight is the launch of ‘Live Audio Rooms’, which would be a Clubhouse-style platform for Android users.

The live audio rooms would allow users to find and play podcasts. The announcement comes as a blitz on Clubhouse, a leading audio app that is available only on Apple iOS devices. The app has created a buzzy online forum for billionaires and public figures like Bill Gates and Elon Musk to address a variety of topics.

Clubhouse is a social media app launched a year back that facilitates auditory communication through rooms. The invitation-only based virtual rooms can accommodate up to 5,000 people and is perfect for hosting live discussions and engaging talk shows or podcasts.

Zuckerberg announced through a blog post that Facebook’s live audio rooms will offer a platform wherein public figures can host live virtual discussions about various topics, with fans listening in. The feature will be initially piloted in Groups, which monthly draws 1.8 billion users, and then eventually expanded to Facebook’s chat messenger. Facebook goals at a wide rollout by the summer.

Facebook’s recent announcement comes as a blow for Clubhouse, which just closed a new round of Series C funding which is indefinitely valued at $4 billion. Apart from Facebook, the app also faces stiff competition from emerging android-based audio forums like Reddit, Discord Stage Channels, Twitter Spaces, Slack and Telegram.

Facebook also plans on integrating podcasts into its main app. Facebook will be partnering with Spotify, the world’s biggest audio streaming and media service provider. The collaboration, which is internally monikered ‘Project Boombox’, would allow users to access Spotify podcasts and music through the audio streamer, without having to leave the Facebook app.

To overcome the challenge of moderating live and recorded audio content, Facebook plans on opening Audio Creator Fund. The fund will support emerging talent and be utilized towards making upgrades based on feedback on the audio format.

Facebook also has other features to create sound effects and improve audio quality under development to be launched by the summer.