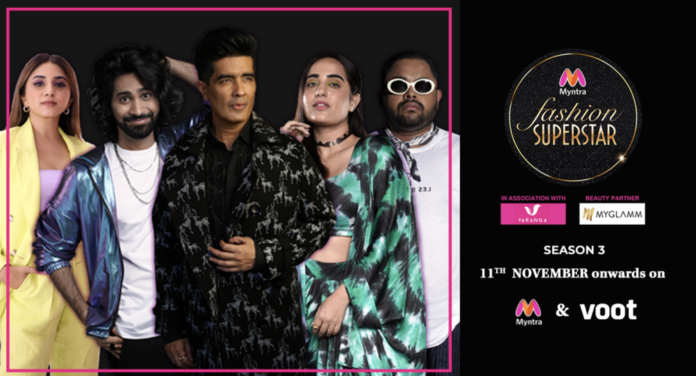 The hunt for India’s next big fashion influencer begins on November 11, 2021 on Voot and Myntra Studio via the Myntra app

Chennai, November 2, 2021: India’s largest digital and fully shoppable reality fashion show, Myntra Fashion Superstar is back with its third season! This year the fiesta promises to be bigger and better as it will showcase glimpses of real-life instances of the contestants engaging and communicating with audiences across the country. Myntra Fashion Superstar will not only give digital influencers across the country a platform to display their creativity to the judges and viewers, but also an opportunity to alter mindsets and create a larger impact on the community. Premiering for the first time on Voot and Myntra Studio via the Myntra app on November 11, the much-awaited digital reality show will have a  jury panel featuring India’s favourite influencers Kusha Kapila, Aashna Shroff, Ankush Bahuguna, and Santu Misra, led by fashion maven Manish Malhotra.

Myntra Fashion Superstar will integrate fashion and social media to create conversations that evoke deep introspection while stimulating and inspiring the youth on aspects that matter to them the most. The theme for the season, #MFSIWearMyStory celebrates unfiltered and authentic conversations, encouraging the influencers (contestants) to be the truest versions of themselves by expressing their journey through their sartorial choices.

The highly acclaimed judges have been handpicked to enable these creators in the making (contestants) to tap into their fullest potential and create their own distinct voices on platforms of their choice. Leading this jury panel is Manish, who has been associated with MFS since season 1, and is among the pioneers in the design space known for shaping, redefining, and modernizing the fashion industry in India. Joining him this season is Kusha, among the reigning queens of social media who’s known for her style as well as sparking humorous conversations through her out-of the box content that often goes viral. As a popular long-standing fashion professional early in her career, Kusha has always been fond of authentic and experimental fashion, her tryst with fashion will help her to share sharp insights as both a creator and an industry insider enabling the contestants to hone their craft constructively. Aashna is one of India’s first and leading self-made fashion influencers, creating inspiring, relatable looks for almost a decade now. Among the other panelists is Ankush, one of the leading male influencers who is known for creating humorous yet super-woke content that challenges norms and biases. And completing this super-talented group is Santu – the king maker, the creative brain who has played a pivotal role in the evolution of India’s digital content landscape in the last few years.

Upon being chosen and invited as judges to assess participants on #MFSIWearMyStory, the members of the panel opened up about their own personal journey and how they wear their stories to remain who they are, captured in short videos that both promote the show as well as inspire viewers.

Manish speaks about the importance of being authentic on social media and how that does not change or impact what he stands for as he increasingly engages with his audience revealing his real self. Santu speaks about his personality trait and being proud about accepting his plus size, while advocating inclusivity in the men’s fashion space. Aashna opens up about the struggles early in her career and the support meted out to her by her mother. Being an introvert, she believes in speaking less and letting her work in fashion do the talking. Kusha speaks about the breakdown she suffered last year and the distressing moments that followed. She stresses on the importance of living for one’s own self and takes delight in influencing people with her story. Ankush talks about bullying and biases he faced as a child, how the camera is his outlet to overcome years of trauma.

Commenting on the partnership, Manish Malhotra, says “I am delighted to be a part of the show once again, as this show holds a very special place in my heart. This is one of the premiere shows in India which gives a chance to the budding fashion influencers to showcase their talent and become fashion icons. This show gives me a chance to interact with fresh and raw talent. I’m eager to watch how this season unfolds and the class acts the contestants will put together this season.”

Kusha Kapila expresses her views on being part of the show, “Very few people know that I have actually worked in fashion for 7 years in corporate jobs across multiple titles and my last job before I became a content creator was as a junior fashion editor. I understand fashion on a deeper level and look at it from a very technical point of view. In my journey early on as a creator, I would love to get insights on my work from established creators and their feedback on my content. Myntra Fashion Superstar is a very interesting intersection of fashion and content. I hope everything that I do contribute to the show makes a difference in the quality of content the contestants create. It’s what I’m here for.”

Aashna Shroff, says “Being a fashion and beauty influencer myself, it’s going to be very exciting to see what the influencers will bring in this coming season of Myntra Fashion Superstar. I have followed the last two seasons and I am quite impressed by the confidence the contestants have in their  fashion and beauty choices  and with the way they carry and express their masterpieces in person.”

Santu Misra, says “We have so many talented youth, with amazing fashion sensibilities, in the country waiting to be discovered. All it takes for that talent to be identified is an opportunity and platform, and Myntra Fashion Superstar is exactly that. I have been a follower of the previous seasons of the show, and  I am absolutely elated to be a part of this season.”

Ankush Bahuguna concludes, “There’s of course, fashion but it takes so much more to be a content creator. I’m so excited to be a part of the show and see what these new creators bring to the table.”

The third edition of the show will host diverse participants with a mix of budding and established fashion, lifestyle, and beauty influencers to battle it out based on their inherent talent, individual expression, and powerful engagement. Myntra Fashion Superstar is set to go live on Voot and Myntra Studio on the Myntra app from November 11. With shoppable looks of the influencers (contestants), exclusive behind-the-scenes footage, and episodic reviews, Myntra Studio and Voot will be the ideal destinations to experience fashion superstars in the making at Myntra Fashion Superstar Season 3. Don’t miss out on binge-watch  the eight-part series of Myntra Fashion Superstar!